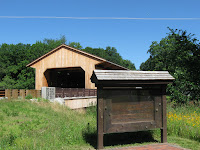 Mrs. Trashpaddler and I trash pedalled from Ayer to  East Pepperell on the Nashua River Rail Trail early this morning.  Arriving in Railroad Square in E. Pepperell, we decided to leave the trail and head down Groton Street.  Doing so soon brought us to this covered bridge.  We were amazed at how close it is to Railroad Square, yet we'd never seen it.  It had been freshly reworked just last year and the kiosk in front of was made from remnants of an earlier version built in 1846.  The bridge spans the Nashua River about a half mile upstream of its confluence with the Nissitissit River.  There's a few I's to dot and T's to cross!  The Nissitissit is a river I hope to paddle one day.
Despite the beautiful job done on refurbishing the covered bridge and surrounding area, I was disappointed to see that a boat launch hadn't been included.  Perhaps there's one nearby and I just didn't see it.
Another big change since our last visit was the demolition of the spawling mills between Mill Street and the Nashua River.   Looks like a bomb hit!  Will the dam remain for the hydro-plant?  The aquatic plants about a half mile above the dam are growing fast and furiously.  Almost looks like one could walk across some of the backwaters!

Our trash haul is pictured... 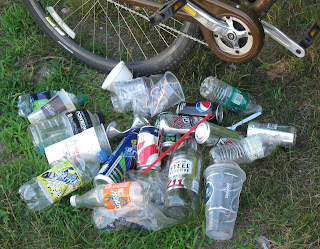 It totaled 23 pieces of trash and brokedownas: 19 recyclable containers (8 redeemable) and 4 pieces of miscellaneous rubbish.  Note the plastic/styrofoam twofer scored by one Dunkin' Donuts patron.  YTD total stands at 3875.﻿
Posted by Al at 3:01 PM