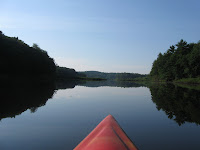 It was just a little past daybreak when we launched into the Sudbury River and headed upstream towards Fairhaven Bay.  The photo at left was taken by the first mate (aka Mrs. Trashpaddler) from her station near our boat's bow.  We were fast approaching Martha's Point and could see the bay in the distance.
We'd already encountered numerous blue herons.  This one was wading in front of the flowering buttonbush... 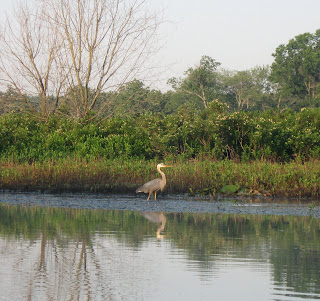 Another heron preferred this tree from which he may have watched the day begin... 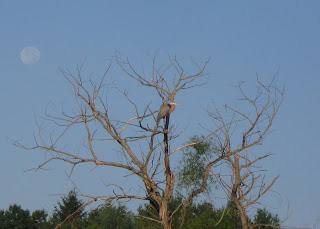 Also seen along the way were adult female ducks with little ones in tow, red-winged blackbirds, and tree swallows.
When we arrived at Fairhaven Bay, Mrs. Trashpaddler used binoculars to scan the far shore to the east and soon spotted a doe with 2 fawns in tow.  The doe was enjoying some breakfast while the frisky fawns seemed more interested in playing.  We watched them from Brooke Island where we stopped briefly to stretch our legs.

Back on the water, we circled the bay before beginning our trip back to the takeout.
Along the way we encountered another white-tailed deer near Jennie Dugan Brook... 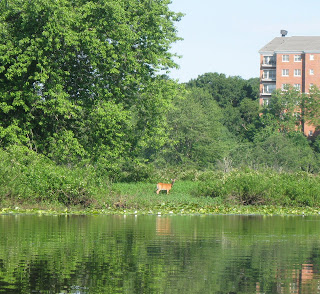 At the takeout the day's trash haul of 27 pieces posed in the fast warming sunshine... 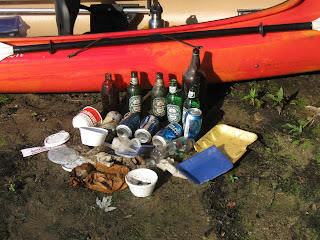 With only 6 days remaining until the Blackburn Challenge I find myself envisioning the bow of my kayak crashing through big seas much as the crab vessel Northwestern does in the opening of each Deadliest Catch episode.  I have to admit enjoying this program that airs on the Discovery Channel and wonder, hypothetically, if I were 28 years old, unattached and looking to earn some fast money while working on the water, which crab boat would I sign-on with: the Cornelia Marie, the Kodiak, the Northwestern, the Ramblin' Rose, the Seabrooke, the Time Bandit, or the Wizard?
For me, it would be the Northwestern.  I recently asked Capt'n Dangerous the same question and with very little hesitation he answered "the Kodiak".  How about you?  Hypothetically speaking?
Posted by Al at 12:17 PM