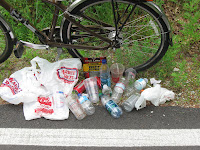 Mrs. Trashpaddler and I did some pedaling this morning on the Bruce Freeman Rail Trail.  Starting near the old Carlisle Depot location, we journeyed up to Lowell and back and recovered the trash pictured at left along the way.  These 20 pieces of trash are fairly typical of what we see along other rail trails.  There were 7 recyclable plastic bottles, 5 recyclable iced-coffee cups, 2 redeemable soda cans, and 6 plastic bags.  This brought my YTD total to 3655.

I'm left to wonder if the increasingly popular slurpy and iced-coffee cups would be included in an expanded Bottle Bill that addresses non-carbonated beverage containers.  Hopefully, they will be.

Another issue that concerns me is the labels on plastic bottles.  The bottles pictured above still retain their identifying labels whereas most of the plastic bottles found in waterways do not (note recent pictures of plastic bottles from the Mystic River).  Apparently, prolonged contact with water dissolves the glue and thus renders plastic soda bottles unredeemable.  A solution to this problem would be to have the redemption status embossed on the plastic rather than on a glued label.   Updating our Bottle Bill is the right thing to do.
The reality is that the odds don't look good for any progress to be made on our outdated Bottle Bill as seemingly all of Massachusetts is transfixed on "all Whitey Bulger, all the time".  They used to say "that's what sells newspapers".  Today, it should be "that's what sells furniture and automobiles".
What passes for Boston television news coverage these days would be comical if it wasn't so pathetic.  Wait, I just heard one major channel has an exclusive on "the Whitey Bulger letters" (written from Alcatraz in the 1950s).  How do the longtime newscasters keep a straight face?  Do they use facial paralysis drugs? Easy to understand why that fellow was living in an underground bunker on Nantucket!  A true visionary?

Since I'm ranting....
The best example of why the Bottle Bill needs to be updated was the guy I saw at a traffic light while driving to the Mystic River on Wednesday.  He was marching up and down the traffic stopped at the light while carrying a sign saying "homeless, please help".  His footwork needed to be nimble to avoid all the worthless plastic trash littering the ground.  An updated Bottle Bill would have resulted in a whole bunch of nickels on the ground rather than worthless litter!           ﻿
Posted by Al at 5:46 PM