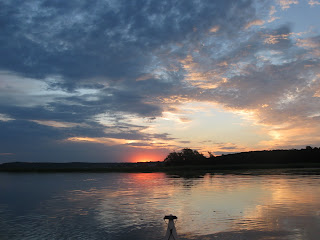 My 2011 Blackburn Challenge started with this promising sunrise enjoyed while paddling to Gloucester High School where sign-in takes place.  Instead of arriving by automobile and dealing with the associated logistical problems, I decided to keep things simple and paddled my boat to and from the event.   This was made possible by camping at the Cape Ann Camp Site in West Gloucester on the road to Wingaersheek Beach.  The campground has been in operation since 1949.  For me, it was a novelty to awaken in my tent, or perhaps with the heat wave we've been experiencing, I should say "sweat lodge", and walk my boat to the campground's boat launch on the Jones River.

Like most participants, I was anticipating a morning of glaring sun and temperatures quickly rising into the 90's.  Lots of sun protection had been slathered on and extra drinking water was onboard.  However, as we all headed to the start area following registration, skies had darkened and raindrops were falling.  Additionally, a welcome breeze was stirring.

With ominous looking clouds to the west, I was concerned the start might be delayed.  That concern disappeared when the loudspeaker came to life and began calling boat classes to the start line.  At 8:25 my class began heading up the Annisquam River and our 2011 Blackburn Challenge was underway.  Soon, I would have the question answered for another year: Do I still have what it takes to propel my boat approximately 20 miles around outer Cape Ann within the 6 hour timeframe allowed?

As we approached the mouth of the Annisquam River, 2 or 3 claps of thunder were heard behind us and this resulted in a short burst of speed (and a little graveyard humor) in hopes of staying ahead of any nastiness.

While we pushed on towards Halibut Point the storm, thankfully, veered off to the south and not another peep was heard.

Upon rounding Andrew's Point we looked across Sandy Bay to Straitsmouth Gap and the grand view of Thacher Island's twin lighthouses.  Still no hot sun, and a pleasant breeze was now keeping everyone cool and collected.

After calling out our boat numbers at the halfway point, we prepared for the toughest part of the event (in my opinion).  Though I've never run the Boston Marathon, I suspect the 5 mile stretch between Milk Island and Eastern Point might be akin the that event's Heartbreak Hill.  This is where a participant's mettle is put to the test.  It's a long slog to say the least.  It was during this section that, despite a fresh breeze, I began to enter the doldrums.  My cadence was falling off and other boats, previously behind, were now in front.  Then I heard a 6-woman outrigger canoe approaching and the vocal instructions from the boat’s coxswain to the crew were hard to ignore.  Their cadence was exactly what I needed, and I decided to try my best to keep paddling alongside them.  Doing so brought me back to life and gave me something to focus on all the way to Eastern Point at which time their speed exceeded what I could continue to match.

Once around the Dog Bar Breakwater the finish line, just 2 miles away, is within sight.  This was when the sun finally emerged from the clouds and things began to heat up.  Boat wakes from every direction required frequent course corrections and my arms were feeling like boiled spaghetti.  It was during this stretch run that one errant and floating beer bottle was scooped from the water while on the fly.  It was sort of like shooting a basketball from mid-court in an empty gymnasium and having it pass through the rim touching nothing but net!

Then, after what seemed to be an eternity, I was passing between the Greasy Pole and the timing boat to the spot where my boat’s bow kissed the sand on Pavilion Beach.  Following this line of boats that finished before me brought me to the food tent, the Ipswich Ale tapmobile, and other participants with whom Blackburn Challenge exploits could be shared... 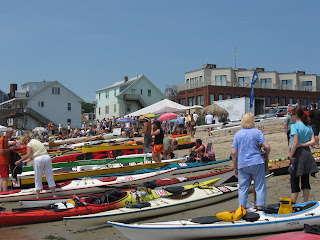 So, at least for one more year the question has been answered in the affirmative!

Oh yeah, almost forgot some trashy tidbits.  To call yesterday’s paddle a trash patrol would be quite a stretch.  However, in addition to the swooped beer bottle were several pieces of trash recovered while enroute to the start line… 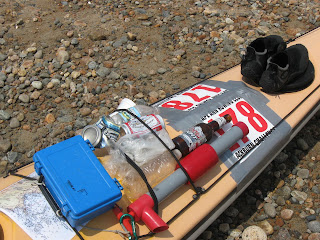 Then this morning, after a good night’s sleep in my tent, I awoke to 2 choices for breakfast: freeze-dried scrambled eggs or a short drive to Jim’s Bagel and Bake Shop.  Shortly, my bagel, coffee, Sunday paper and I were enjoying each other’s company while parked along Stacy Boulevard as the Blynman Canal drawbridge opened and closed periodically.  It was while sitting there, I saw the gentleman wearing a black NASA T-shirt pulling a 4-wheeled wagon along the sidewalk.  He stopped at each trash receptacle and fished any redeemable containers from within.  Was he perhaps a laid-off Shuttle worker?  Only 10 minutes later, along came a contractor’s pick-up truck with a crew of 2 men emptying the same containers.  Perfect timing by the wagon-pulling man!

A little later, I’m back at the campground and notice a true recycler going through the trash dumpster and pulling out a considerable amount of recyclable containers.  He was placing these into the adjacent and well-marked recycling bins.  I’m thinking, perhaps folks were busy and didn’t have the time to recycle.  Then I remember, this is a campground where folks come to escape time constraints.  If they can’t bring themselves to recycle here, it’s not likely they ever will and that begs another question: Would the Native Americans find us worthy of inheriting the land they once revered?
Posted by Al at 6:46 PM

Congratulations on completeing the Challenge, especially in this heat and after spending the night in a hot little tent!

Thanks Penobscot Paddles, I don't think I've ever been so glad to see clouds and a little rain. The most useless item I had with me was my 3-season sleeping bag for overnight temps that stayed in the 80's.

Enjoyed the post...
You mentioned tent camping and was wondering where you camped out, if I may ask?
Thanks-
pete

Pete, I camped at Cape Ann Camp Site in West Gloucester. Approx. 200 sites in a wooded setting. Most importantly for my purposes, they have a boat launch into the Jones River which connects with the Annisquam River.