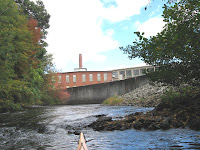 When I launched my kayak into the Sudbury River this morning, a visit to Saxonville was not in my immediate plans. Original plan was a downriver trip to Indian Point and back. However, after getting on the water downstream of the riffle at Little Farms Road in Framingham, the waters upstream of the riffle beckoned. First, it was just to see if there was enough depth to paddle through the riffle. There was and once that was done, I figured I'd go as far as the MWRA crossing. Well the next thing I knew I was at the Saxonville gauging station where the water level was under the bottom of the gauge which starts at 5 feet.
Up to this point I had recovered only 17 pieces of trash. Across the river from the gauging station was a drainage culvert with quite a bit of trash near its base. My trash count quickly went from 17 to 54 following a brief shore raid. Once back onboard I was ready to head downriver, but thought maybe I'll just go a little further upstream. Thanks to recent rains the level was near perfect for paddling around Otter Neck in Saxonville and soon I was looking at the mill and the final bend towards the Saxonville Dam. Just below a short drop, I sat in an eddy and enjoyed lunch while my boat made several 360 degree rotations only a few feet from the rushing water. Only other critter around was a kingfisher. I'm beginning to think that the belted kingfisher should be my adopted totem!
With lunch finished I let my bow swing into the flow and began my trip downstream. Despite today being rather breezy, wind was only a factor between Otter Neck and Danforth Street.
I arrived back at Little Farms Road with 73 pieces of trash. Not a bad count for only a mile and a half stretch of river. A large piece of styrofoam may have been from the Route 9 bridge construction. Someone had commented on seeing several pieces blow off of barge into the river a few weeks ago.
The gang assembled for a group portrait near the water... 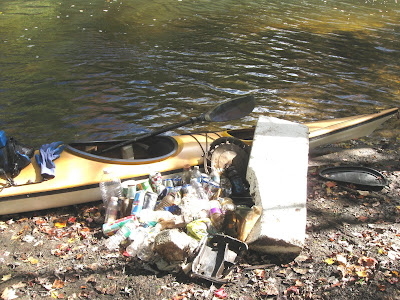 Returning to my car I came upon a significant amount of trash dumped in the bushes. A case of empty Mike's Lemonade bottles and another 6-pack of beer cans along with some miscellaneous rubbish. This brought the count for the day to 114. Of these 72 were recyclable (49 redeemable) and 42 were general rubbish such as plastic bags, styrofoam chunks, another balloon, a wheel cover, and candy wrappers. My YTD total stands at 4203. Additional photos can be seen at this link. The trip to Indian Point will have to wait for another day.
Posted by Al at 3:35 PM