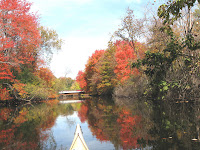 A true Indian Summer day! Sensing that there won't be many more days like today, I quickly finished my work obligations and made a bee-line to the Kellogg Street launch site on the Sudbury River in Framingham. I was in my boat and heading upriver by 10 am. My goal was to trash patrol this stretch of river for the first time and reach the dam at Winter Street. Sure was nice to be paddling in just a t-shirt (with pfd) again!
Trash was plentiful, most of it being styrofoam pieces that may be related to construction work at several bridges. The fall foliage continues to provide some nice vistas.
The Route 9 bridge was reached and it looks like the construction project here is nearly done. However, work is ongoing at Main Street and Franklin Street. In fact at Franklin Street, I surprised two guys doing masonry work to the bridge's underside as I paddled under their staging.
Hearing a train's horn upriver, I tried to reach the railroad bridge in time to see the train but just missed it. The rail line that crosses the river is the Agricultural Branch Railroad (now part of CSX) and it runs from the freightyard in Framingham to a point near Fitchburg. It was once part of the Old Colony System.
Continuing upriver I noticed the current getting much stronger and there were numerous obstacles to paddle over or around. A belted kingfisher was seen in this area. As I neared Winter Street I could hear the building sound of the water falling over the dam. Emerging from under the Winter St. overpass, I came upon this view of a Gothic-looking gatehouse and the dam... 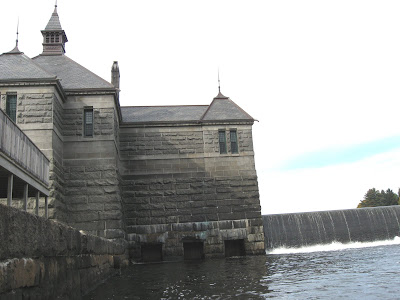 Above this point the river is a reservoir and paddling is not allowed.
After turning around, I soon found myself making excellent time downriver and needed to apply the brakes at several tricky spots. At Franklin Street, I just ducked my head in time to pass under the worker's staging. The cries of a red-tailed hawk were heard and I got a glimpse of him circling overhead. Near Bowditch Field another very distinctive sound was heard. Pipes, as in Bag Pipes and they sounded rather nice! Caught a brief glimpse of the Piper, in silhouette, standing next to some storage containers. It is one instrument that seems meant to be played and heard outdoors.
Reaching my takeout location, my trash count was 56 pieces. Of these, 22 were recyclable (6 redeemable) and 34 were misc. rubbish such as styrofoam (thin white rolls and hard pink blocks), plastic bags, and a child's flotation device. The most egregious was a blue plastic pail with a big glob of blue paint inside. The lot of them posed in the 'Indian Summer' sunshine before entering the dark confines of my car's trunk... 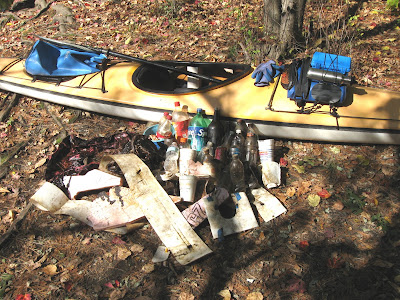 My YTD total stands at 4410. Additional photos can be seen at this link.
After everything was loaded in and on my car, I walked back down the path to the river and a red-tailed hawk swooped down from behind me and flew only a couple of feet above my head. Perhaps he fancied something on my hat?
Posted by Al at 3:50 PM

Cool picture of the gatehouse - really enjoy your posts. Still can't believe you saw a moose. When you see a bear I'm going to be worried.

Love your pics-particularly the foliage shot approaching the Rt 9 bridge. Went for a run at Callahan last night for the same reason - such a gorgeous day. Of course one of those runner-hating roots reached up and threw me down again - Seems like nature abhors runners sometimes :)