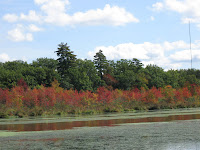 Today, I trash patrolled the Assabet River between Ice House Landing in Maynard and Gleasondale in Stow. At launching, late morning, skies were sunny but the trend was for building cloud cover as the day progressed. Foliage along the water is beginning to show some color especially in contrast to the evergreens. Water levels are, once again, on the rise and one brook in particular was contributing a strong flow. I believe it to be Fort Meadow Brook and it enters the Assabet about a mile downstream of Gleasondale/Rt.62.
Three other kayakers and one fisherman were also noted to be enjoying this stretch of the river.
Wildlife was plentiful with numerous blue herons, two families of mute swans, several cormorants, a few wood ducks, a broad-winged hawk, Canada geese, a muskrat, and many painted turtles.
A very tame pair of ducks were encountered that allowed me to get very close. The female never moved while the Drake was floating upside down. On closer inspection they turned out to be decoys that had been left behind by a duck hunter. I'm hesitant to remove these from the water as it is possible they were left by a hunter who may be returning to get them.
Photos from today's patrol can be seen at this link
Trash started with a "Happy Birthday" balloon and finished with a plastic milk crate. In between were plastic bottles and beer & soda cans. About 10 pieces of trash were recovered on the short path leading from the river to Route 62 in Gleasondale.
The total for the day was 37 pieces. Of these, 31 were recyclable (15 redeemable) and 6 were misc. rubbish. Here they are assembled at Ice House Landing... 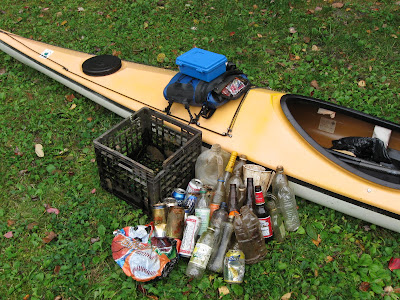