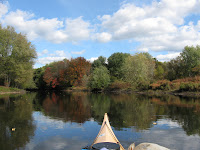 Late this morning, I once again ascended the Assabet River, curious to see if the Moose I saw last Sunday might still be around. Starting at Egg Rock I soon reached Willow Island and found no belted kingfisher to provide an escort for me this time.
Continuing on alone, I passed under Route 2 and began slowly approaching the backwater on river left where I saw the Moose. Today, there was no sign of him other than this scat he left near the spot where I photographed him... 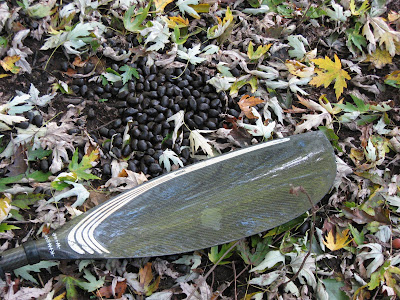 I placed two fallen tree limbs across the stunted tree in an X to mark the location where the Moose was seen.
As I continued upriver, just before passing under the commuter rail bridge at Concord Junction, I noticed a table for five set up on the river's left bank. It had a pumpkin for a centerpiece, disposable cups, and a trash receptacle with plastic liner. Though an odd spot for a dinner table, everything was quite tidy.
At Pine Street, I passed under the new bridge for the first time since it opened to traffic (later, while driving home, my car made it's first trip across the bridge as well).
Passing the Thoreau School, the voices of children at recess could be heard drifting down towards the river. Perhaps my two grandchildren were contributing to the sounds of kids at play?
Near Cousin's Field a tree loaded with cherry-sized red fruit hung over the river. Not sure what the fruit was but amazed that it hadn't been consumed by wildlife. Reaching the large rock and blowdown before Westvale, I turned around and began my return journey. Almost immediately, an osprey flew across my path.
Trash was found more frequently in the section of river, upstream of Pine Street.
The table for five seen earlier near the commuter rail bridge was gone. By the time I arrived at my takeout location, I had 25 pieces of trash. Of these, 18 were recyclable (9 redeemable) and 7 were misc. rubbish. They gathered on a small beach for a group portrait... 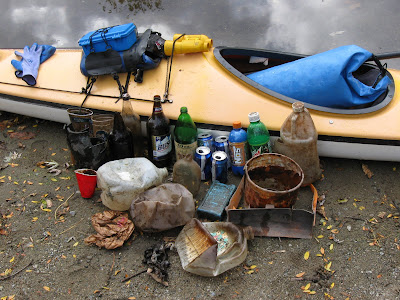 One odd find today was a bottle of "Old Quaker". I'd never heard of that brand before. My YTD total stands at 4235. Additional photos can be seen at this link.
Posted by Al at 6:29 PM