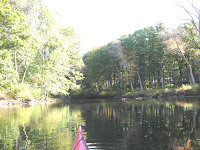 Early this morning, on the water at sunrise, my intention was to trash patrol the Concord River. However, upon reaching Egg Rock, I couldn't resist making one more visit to "Moose Cove" on the Assabet. Once again, my kingfisher friend was unavailable to accompany me, so the trip upriver was a solitary one. Between Willow Island and Spencer Brook, I heard gunshots and must admit to, at first, thinking the moose may have become the target of a hunter, but fortunately that was not the case. The shots were most likely being fired at the Concord Rod & Gun Club located on the other side of Barretts Mill Road.
Several groups of wood ducks were seen along with Canada geese and Muscovy ducks. Grey squirrels were busy along the river's banks. Pieces of trash were few and far between and mostly old. By that I mean they had been in the river for many years. The oldest was a small 3-ounce medicine style bottle of "Roderic Cough Balsam".
Once past the Route 2 bridge, I slowed my pace and scanned both sides of the river for the moose. Alas, he was nowhere to be seen.
Further upriver, I did see an osprey perched in a tree above where the Old Colony Railroad bridge once crossed the river. Crows discovered the large bird at about the same time and their annoying behavior soon succeeded in persuading him to leave his perch.
At Pine Street I turned around and began the trip back downriver. Near the mouth of Nashoba Brook, I came across what appeared to be a coconut. No idea how or why it was there.
Finding Willow Island awash in sunshine, we all went ashore and the grizzled gang of trash refugees posed briefly for this portrait... 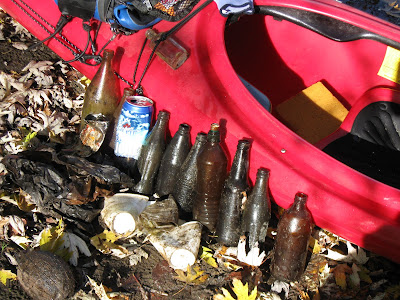 My count for the patrol was 16 pieces. Of these, 10 were recyclable (5 redeemable) and 6 were misc. rubbish such as plastic bags, gloves, and paper cups. My YTD total stands at 4251.
Additional photos can be seen at this link.
Posted by Al at 1:37 PM