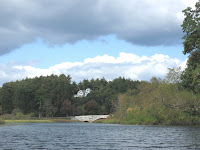 It was a perfect fall day for a trash patrol on the Sudbury River. I was lucky enough to find myself on the river at 10am and the bow of my kayak was pointed upstream. Temperatures were in the 60’s and a pleasant breeze was busy out the west. After passing under Route 2, I came upon a large, well built and busy hornet’s nest near Clamshell Bank. Just a bit further upriver, I found my kingfisher escort was waiting in a tree and upon my arrival he began flying vanguard for me. We stayed on the right side of the river, passing a pair of perched cormorants as we made our way to Heath’s Bridge. At the bridge a turkey vulture and an osprey patrolled the river from overhead while two shore-fishermen were trying their luck from under the bridge. Before my arrival, one of them had caught a 6-pound large-mouthed bass.
At Fairhaven Bay, my kingfisher escort veered off leaving me to proceed further upriver on my own. A red-tailed hawk left his perch on Brooke Island and flew across the bay while a pair of mute swans occupied the bay’s NE corner. The osprey could still be seen working the skies between the bay and Lee’s Bridge.
At Pantry Brook Falls, the flow resulting from Saturday’s rainstorm was trying to get through the new dam that beavers are building on top of the man-made barrier. It was easy to imagine the beavers busily going about their work under last night’s full “Harvest Moon”.
Reaching my turnaround point at Weir Hill, I went ashore to stretch my legs and enjoy some lunch in the sunshine.
The trip back downriver was made under some darker clouds moving quickly across the sky. Near my take-out location there was a very brief sprinkle of rain.
Addition photos from today's patrol can be seen by clicking on this link.
Trash today consisted of another B’day balloon, a ruptured boat fender, bait tubs, fishing line/hook/ bobber, plastic bags, a shirt, and beer/soda containers. Here they are, back on terra firma again... 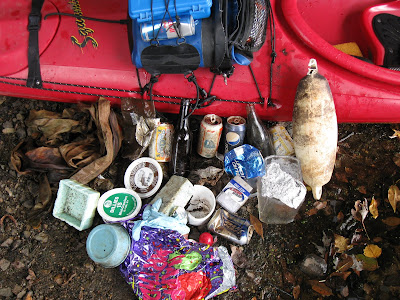