Concord River - Egg Rock to near Ball's Hill & Back 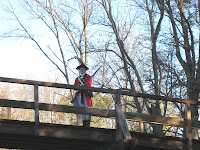 Sure was glad to be paddling my red boat for this morning's trash patrol, for as I approached the North Bridge, this British soldier stepped onto the bridge and inquired as to the nature of my business on the river. Once convinced my last name was not Revere or Barrett and noting the PC correct color of my craft, he granted me leave to pass under the bridge. Of course, I tried to tell him that the Patriots he was guarding the bridge from are actually in 'jolly old England' this morning, but he wasn't buying any of it!
Proceeding downriver, I noted substantial progress has been made in the construction project at Flint's Bridge. At Great Meadows, the Fish and Wildlife people have their 'Gator Pump' setup to provide additional water for the impoundment areas. After passing Saw Mill Brook, I noticed my favorite cabin on river left appears be occupied again, after many years of sitting empty.
Wildlife seen this morning were ducks, Canada geese, blue herons, a couple of turtles, and a hawk near Buttrick's Hill.
Trash was not too bad, beer cans and styrofoam at 1/4 mile intervals.
I turned around at the beaver lodge near Davis Hill and headed back upriver. Paddled alongside a conoeist from the Millbury area for about half a mile. Mike was paddling on the Concord River for the first time. He often paddles with the Rhode Island Canoe & Kayak Association (RICKA) in the heart of Nipmuc and Narraganset country.
From Saw Mill Brook back to Egg Rock the river was busy with fishermen, kayakers and canoeists. The North Bridge area was also quite busy. Good to see so many folks enjoying the river and its banks!
At the mouth of the Mill Stream, I stopped to admire the work of some local beavers.
Arrived at my takeout location with 26 pieces of trash. Of these 13 were recyclable (9 redeemable) and 13 were misc. rubbish such as styrofoam cups, bait tubs, and plastic bags. They proudly posed for a snapshot before hopping into my dry bag... 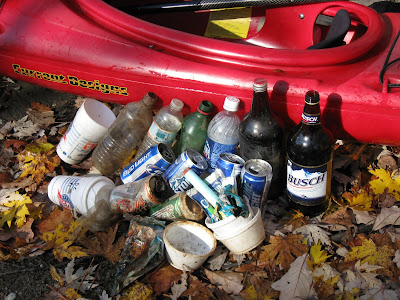 My YTD total stands at 4436. Additional photos of today's patrol can be seen at this link.
Posted by Al at 1:56 PM

As I view your photos. Reflect on the ingenuity of early folk recognizing the power potential of the streams. I cannot but think of the lessons taught by natures critters for those who WILL see.

Dixit et Fecit, True. Those early folks saw how the beaver's creation held back the stream. Had they looked a little closer, they would have noticed how any herring, shad, or salmon worth their salt could easily find a way either through, around or over. The version of the beaver's dam that we built was a little too effective and therefore meant the end of the road for anadromous fish.

Hey - I think I know Mike from the Millbury area - RICKA paddlers are everywhere!