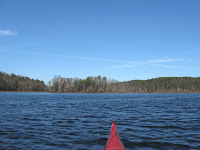 Yesterday's big blow finally calmed down enough overnight to allow an early morning trash patrol on the Sudbury River from Route 62 up to Weir Hill and back. After launching into the river's relatively calm waters, I began heading upstream. Almost immediately I heard the approach of the morning's first train to Boston and turned around in time to watch it pass over the river. Train 2402 was on a schedule to reach North Station at 8:15, whereas I, running on the river as an "Unscheduled Extra", would reach Weir Hill at about 10:15 or so.
The first trash encountered was just before reaching the Route 2 overpass on the river's east bank, below the highway. Several cans, a couple of bags and a 18 foot-long piece of facia board 6" wide by 1/4" thick. Fortunately, it broke easily into many small pieces which fit into my kayak's aft storage compartment.
The Heaths Bridge area was good for a few cans and bottles but was cleaner than usual.
Reaching Fairhaven Bay, I found its water's being fished by a pair of two-man boats.
The bay's Brooke Island had a beer can gleaming in the sun on its small beach. The can was just beyond the reach of my out-stretched paddle blade thus requiring a short foray onshore. Once on the island, I found 7 more cans strewn around the burned out stump of a white pine. Seeing the remains of the tree's trunk lying on the ground nearby reminded me of the "Project Mishoon" website and its link to an account of the dugout canoe recovered from Great Pond in Weymouth back in 1965. That dugout was said to have been made from an eastern white pine measuring 10 feet in diameter and estimated to have been between 150 and 200 feet tall. It was radiocarbon dated to around 1505.
Heading upriver from the bay, I noticed that a breeze was building out of the west/southwest, however it was nothing like yesterday's wild gusts!
Nearing the mouth of Pantry Brook, the sound of water falling could be heard. Paddling up to the sheet-piling structure I found the water being held back was at a level about even with my head. The structure itself is now a man/beaver hybrid with a truly unique look!
At Weir Hill I cut the power and drifted into shore where a short hot-cocoa break was enjoyed. Temperatures were warming nicely and soon I was on my way back downriver.
Wildlife seen today were mallards, Canada geese, a solitary blue heron, and a pair of red-tailed hawks. Beavers were not seen today but evidence of their recent work was abundant.
Arrived at my takeout location with 27 pieces of trash. Here they are on solid ground again... 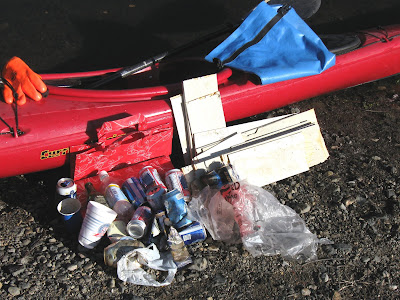 Of the 27, 18 were recyclable (16 redeemable) and 9 were misc. rubbish such as the facia board and plastic bags, and styrofoam. My YTD total stands at 5298.
More pictures from today's patrol can be seen here.
Posted by Al at 4:37 PM