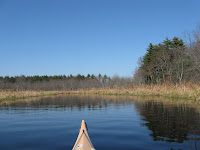 It was certainly an unexpected luxury to have two beautiful days on a weekend in mid-November. On Saturday, Mrs. Trashpaddler and I traversed the recently opened Bruce Freeman Rail Trail for the first time. It is a very nice trail indeed! When we reached Chelmsford Center we viewed the wall murals and noticed one of the murals depicts Middlesex Village as it looked during its days as a Middlesex Canal terminus. It shows the three locks the Thoreau brothers passed through to enter the Merrimack River.
Today was the bonus day and conditions early this morning were ideal for a trash patrol on the Assabet River in Hudson and Stow. Once again, I launched at Cox Street and headed downriver. A beaver led the way for the first half mile. He may have been heading back to his lodge after having worked the night shift.
My objective was to cleanup the trash collected behind several snags where the river makes it curve to the west. Passing by the shooting range, all was silent and upon reaching the first snag, my work got underway. A red-tailed hawk watched me "like a hawk" from his nearby perch on a pine tree bough. Shortly, after two transloadings, I had more than 150 pieces of trash onboard. I then passed under one fallen tree and slid across another in order to reach Gleasondale and the dam. Before reaching the village, I watched 4 red-tailed hawks soaring together as they rode the updrafts.
Once in Gleasondale, I looked around the area upstream of the dam trying to envision just how one might conduct a portage and didn't see anything that looked reasonable (short of passing through someone's yard).
I then turned around and began the trip back upriver. It sounded like the "Gunfight at the O.K. Corral" as I passed by the shooting range! A belted kingfisher flew ahead for a short while. Arrived back at Cox Street with a sizeable load. The count for the day was 218 pieces of trash. Unfortunately, the earlier sunshine was gone and the rescued refugees were denied their moment in the sun... 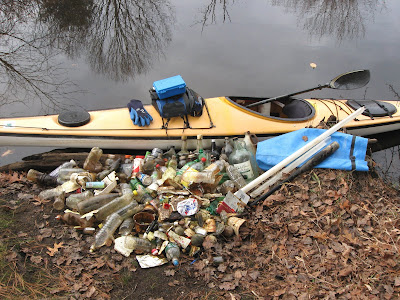 Of the 218 pieces of trash, 88 were recyclabe (24 redeemable) and 130 were misc. rubbish such as styrofoam, plastic bags, cans of spray paint, a baseball bat and an eight-foot fluorescent light bulb. My YTD total stands at 5271.
More pictures from today's patrol can be viewed at this link.
The before and after photos were taken at the same spot as the cover photo for my Trashpaddling 2010 calendar which, by the way, is available for purchase at Willow Books an Acton.
Posted by Al at 4:24 PM