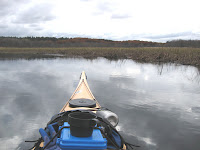 On a day that, appropriately, had both the look and feel of November, I trash patrolled the Sudbury River from River Road in Wayland up to the power lines and back. The highlight of today's trip was pausing near Indian Point to enjoy a hot cup of cocoa. Hot cocoa fits nicely with the other indications of the season that is now upon us: early sunsets, the smell of woodstoves burning and leafless trees seen against a steel grey sky. It reminds me to download Gordon Lightfoot's song Wreck of the Edmund Fitzgerald before my next patrol. That is the ultimate song for November in my opinion.
At Route 20, it was good to see that the temporary bridge has been removed and the newly built span is carrying traffic in both directions. Work continues at the bridge approaches where sheet piling is being installed. Hearing protection is required on this jobsite!
Trash recovered today was mostly old looking stuff that has probably been in the bushes for quite a while.
Wildlife seen today were a blue heron, cormorants, mallards & wood ducks, Canada geese, and this solitary mute swan that may have lost its mate... 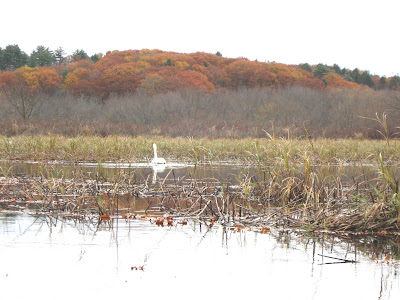 There are at least four active beaver lodges in this stretch of river which amounts to about one lodge per mile.
Once back at River Road, this hodgepodge of trash disembarked and assembled in a 'Table Top' pie delivery rack... 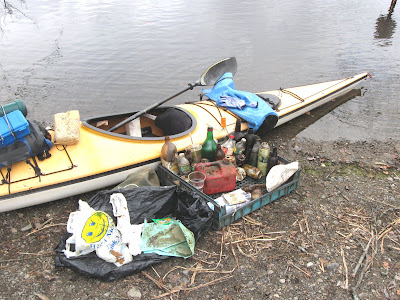 The count was 39 pieces and broke down as follows: 20 recyclable (9 redeemable) and 19 pieces of misc. rubbish such as plastic bags, styrofoam, spray polish, and an empty plastic gasoline container. My YTD total stands at 4609.
A duck hunter was launching into the river as I was getting out. He and his small skiff were well camouflaged. Ducks be wary!
Posted by Al at 4:31 PM