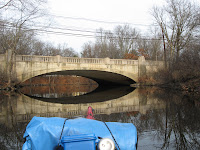 It certainly was a pleasant day for a trash patrol on the lower Sudbury and Assabet Rivers. Especially considering what month we've just begun and how the weather could take a turn for the worse any day now!
I launched into the lower Sudbury River and began paddling downstream to Egg Rock. Enroute, I encountered a red-tailed hawk near the Concord DPW yard. A little further downstream, where the Boston & Maine RR (Reformatory Branch) used to cross the river, was enough trash to justify a short raid onshore. Trash there included an empty sword sheath, really large vitamin container, empty beer/soda cans, and plastic bags. A good little haul of 19 to start the patrol on the right paddle. Reaching Egg Rock, I decided to ascend the Assabet River as water levels were ideal. Quite a bit of trash in the first mile or so including a tidy little bag with 6 Pabst Blue Ribbon cans. Not a brand I see very often. For some reason, I associate that beer with the late 1960s. Do they still advertise it?
A little before Dodge Rock, beavers have been very busy and a new lodge is under construction. Once again, a beaver has a tree ready to fall but it is still being held up by the limb of an adjacent tree. If the beaver isn't careful, the next bite could result in a serious injury or worse.
Large groups of Canada geese were encountered both on and off the water. Some mallards were mixed in with them. This seems to be their winter pattern. Blue jays, chipmunks, and squirrels were also fairly busy today.
Arriving at the mouth of Nashoba Brook, 87 pieces of recovered trash were onboard. It was then, I saw a white propane cylinder, typical of barbecue grills, stuck against some brambles. I moved it up to the river bank and after some hemming and hawing, decided there was no better time than the present to deal with it and sat the tank upright in the boat's rear hatchway.
Now with a good load onboard, my bow was allowed to be turned by the current and soon I was passing downriver under a somewhat backlit Route 2 overpass. The picture I took here is the opening shot of this post. Added a few more pieces of trash on the way back and arrived at my takeout location with 93 pieces. Took this photo of the gang as they lined up for inspection... 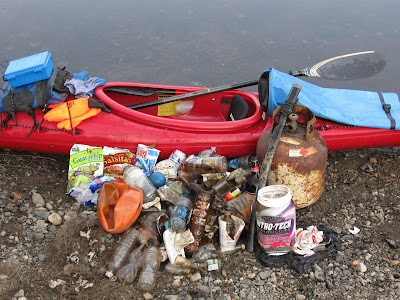 Of the 93, 40 were recyclable (14 redeemable) and 53 were misc. rubbish. My YTD count stands at 5391.
Does anyone know of how I can properly dispose of an empty propane tank?
Additional photos of today's patrol can be seen at this link.
Posted by Al at 4:51 PM

Local transfer station may accept it. Perhaps valve needs to be removed.