Driving over the Route 27 overpass, I look down to the railroad tracks below and see a small local freight sitting on what’s left of the Boston & Maine (B & M) Railroad’s Marlborough Branch at South Acton Junction. The train is waiting for the dispatcher in North Billerica to activate a green signal that will allow them to pull out onto the Fitchburg Division mainline and head to the east.
About an hour earlier, I had met with this train’s conductor and filled out the requisite shipping forms so that my three carloads of river trash could be pulled out of the weed-choked siding where they had been loaded. The conductor and I were able to escape the December chill and attend to our paper shuffling business within the warm confines of the coal-stove heated caboose. Once inside the small caboose, I was surprised to see a fully functional, mobile office where railroad freight business has obviously been conducted for many years... 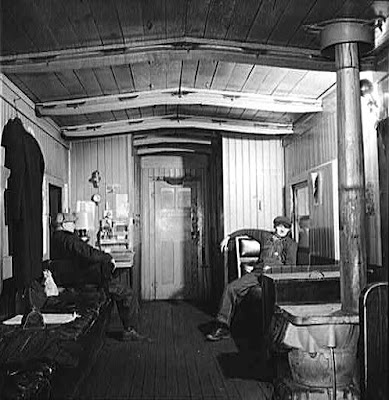 There was quite a bit of paperwork involved for what would amount to a fairly short trip by rail to Concord Junction where the railroad will deliver the cars to the Concord Reformatory & Redemption Center (CRRC). That is where the cars will be received and their contents unloaded for processing.
Finally, with all our paperwork in order, we stepped outside and watched as the engineer nosed his diesel -electric locomotive # 1270 slowly into the siding and up to the first of the three cars. The big knuckle at the front of the engine coupled with the one on the car and brake-system air hoses were connected. After walking to each car and releasing its hand brake, the brakeman signaled to the engineer that it was OK to start pulling. Rich black smoke rose up from the short exhaust stack on the well maintained and recently painted S-4 switch engine. This first generation diesel powered switcher had been built by the American Locomotive Company (ALCO) in Schenectady, NY back in 1950, about 6 months before this trashpaddler issued forth. The ALCO 539 turbocharged diesel engine whined as the engineer notched up the throttle and several of the doors along the engine’s side began shaking until finally, despite some protesting squeals from stubborn wheels, the three cars began to move.
I watched as each car exited the siding. The first was a B & M boxcar just behind the engine and it contained all of the non-recyclable miscellaneous trash recovered so far this year. Miscellaneous trash such as styrofoam, plastic bags, and paper represent 44% of what I’ve removed from local rivers. This car will be “set off” at CRRC’s trash-burning incinerator where its content's combustion will help to generate electricity and heat for use within the facility.
The next car, a covered hopper, is filled with recyclable (but not redeemable) containers and represents 33% of the recovered trash. Most of these plastic and aluminum containers are identical to the more valuable redeemable containers, but, sadly, are not included in the current Massachusetts Bottle Bill. This car’s contents will be dumped into the large sorting bin for later re-processing.
Bringing up the rear, the car just ahead of the caboose, another covered hopper, is filled with the redeemable containers and represents 23% of the recovered trash. These plastic and aluminum containers will join the non-redeemable ones after redemption. This car has noticeably less wear & tear than the other two. Hopefully this will change when Massachusetts updates the Bottle Bill to reflect the changes in people’s beverage consumption that have taken place since the Bottle Bill was enacted 27 years ago.
The HDPE and PET plastic portions of the containers will be re-processed into various plastic products by the facility’s state of the art equipment. The facility is a joint public/private venture providing gainful employment for inmates, and uses the same technology once utilized by a local kayak manufacturer. Aluminum and glass containers will be sold to container manufacturers for recycle.
After finally getting their “High Ball”, the train pulled out onto the mainline and I snapped these photos, while standing trackside, of first the engine and then the caboose as they exited the Marlborough Branch… 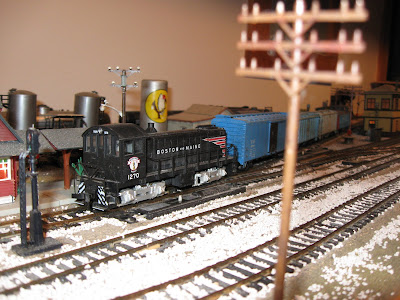 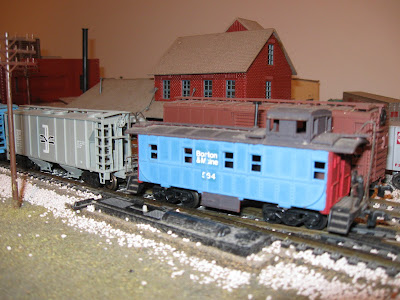 Soon after new 2010 calendars are hanging on walls, the three, now empty, cars will make the return trip to the cold and most likely snow-covered siding where they will await being filled once again. Hopefully next year, the springs on the redeemable car will be the most compressed.
By the way, wouldn’t a Trashpaddling 2010 calendar look good on your wall? :) It can be purchased locally at Willow Books in Acton or online at this link.
Any funds remaining after printing & handling costs will be used towards the purchase of miscellaneous trashpaddling supplies such as gloves, trash bags, dry bags, etc.
Posted by Al at 10:32 AM

You got me on that one. Read this one at work without access to the pics and thought you were serious, i.e. you really had arranged for the recyclables to be shipped by rail. Boy to I feel silly now :)

Lis, Sorry about that! Hard to keep my fondness for freight trains from 'channelling' in, especially at this time of year!
I'd need another lifetime to actually fill three railroad cars with trash.
Only thing that was real were the percentages of recovered trash.