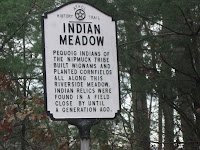 After seeing the Athol History Trail sign, Indian Meadow, I was reminded of an Indian meadow located in my town of Acton.  Most folks visiting this meadow today may not be aware of its Native American connection.  Today it is known as Heath Hen Meadow and the brook flowing through it Heath Hen Meadow Brook... 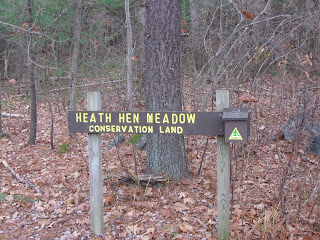 Anyone looking at an old map (left side) would see that the brook was originally named Heathen Meadow Brook.  My guess is that it was changed during the 60’s or 70’s when political correctness became the order of the day.  Isn’t it interesting what adding an h and a space can do?   The unfortunate thing, in my opinion, is that the meadow/brook’s association with a Native American presence in Acton was lost in the process.  Heath Hens,  now extinct chicken like birds, may or may not have lived in the meadow.  When I visited the meadow yesterday, it was a Native American encampment which my imagination envisioned... 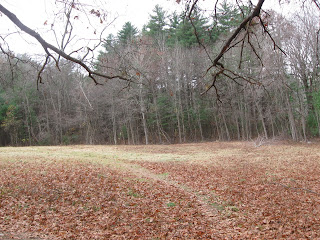 Were those Native Americans heathens?  According to the Random House Dictionary of the English Language, the word heathen is defined as “an unconverted individual of a people that do not acknowledge the God of the Bible”.  I believe the derogatory associations this word invoked were due to the adjectives, too often, placed before it i.e. filthy, bloody, merciless, etc.  Mary Rowlandson, in her narrative, described her captors with such terms, commonly used at the time.  How much better it would have been had early colonists chosen to name it “Indian Meadow” as did the early settlers of Athol.  The name might have survived, and thus the connection.

So, while Native Americans no longer pitch their wigwams in this streamside meadow, this beaver continues to lodge closeby… 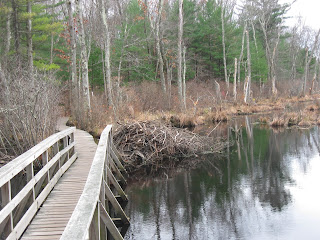 wow, such a little space shows the immense gulf that can exist between two cultures ...