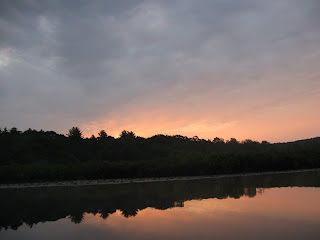 With hopes of combining both moonlite and a sunrise into a Sunday morning trash patrol, I launched a little before dawn into the Sudbury River and began heading upriver. The nearly full moon had either retired early or was hiding behind cloud cover in the western sky. The anticipated sunrise would follow-suit after providing just this little tease, photographed downstream of Heath's Bridge.
The trash at Heath's Bridge wasn't bad today. All but one piece was old stuff recently exposed by a further drop in water level. I left the bridge area with an even dozen.
I arrived at Fairhaven Bay to find not another soul except a deer foraging on the eastern shore. Between here and Lee's Bridge I would see 3 more deer including this young one... 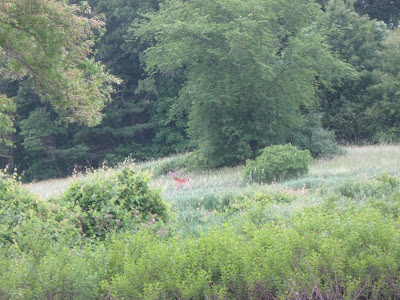 Even though the nearly full moon was concealed by clouds, it still seemed to live up to its reputation in regards to increased wildlife activity.
Upstream of Lee's Bridge I watched as a red-tailed hawk maintained a regal perch, at the top of a pine, despite the small black bird that continuously flitted annoyingly about his head.
Near the mouth of Pantry Brook I noticed a beaver on the top of his lodge. When he disappeared from view, I thought he had seen me. However, he swam towards my boat, dove under the surface and soon reappeared with some sticks in his mouth. These were brought back to the lodge and quickly put to use on his roof repair project... 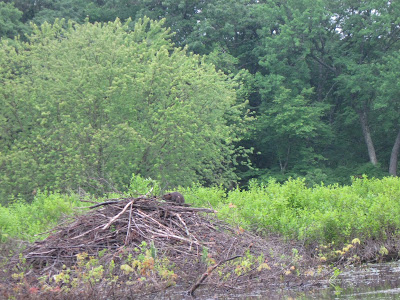 I turned around here and began heading downriver. On the way, I encountered this small duck/duckling... 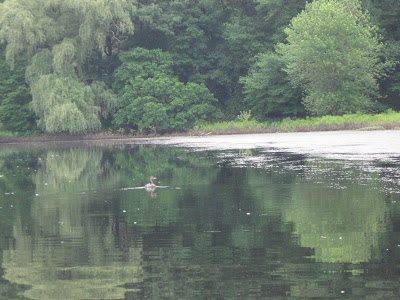 His most notable feature was a whitish bill with a black stripe on it. He also spent quite a bit of time underwater. My uneducated guess would be a young ring-necked duck?
Other wildlife observed today were red-winged blackbirds, swallows, wood ducks, mallards, Canada geese, musquash, large and small turtles, and many great blue herons.
Entering Fairhaven Bay required some grass paddling... 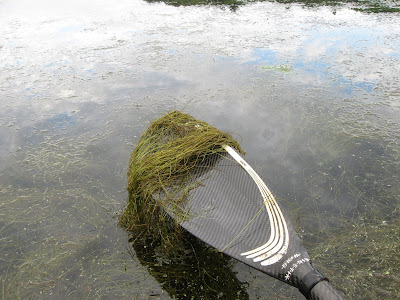 I guess this is how the river earned its Native American name, Musketaquid, which is said to mean "grass grown river". With the now shallower depths, the long grass, rooted to the riverbed, is visible as it leans downriver with the current.
The sky was much improved as I approached Heath's Bridge... 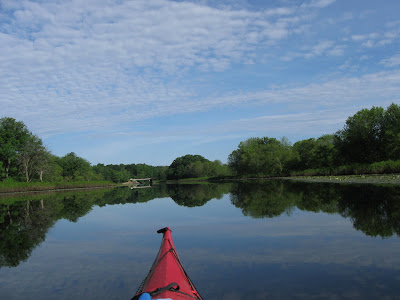 Paddling under the bridge I counted 7 fishermen casting from the shore there.
After passing under the Route 2 bridge, I found two orphaned canoe paddles perched on some rocks and returned them to the nearby canoe livery.
At my takeout location my trash count for the day was 14... 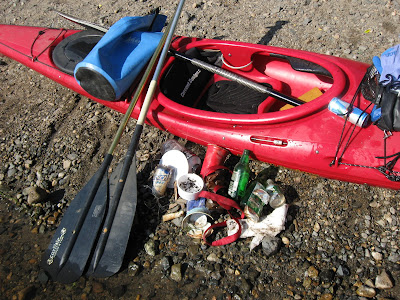 Of these, 7 were recyclable (4 redeemable) and 7 were misc. trash such as monofilament fishing line, styrofoam, paper plates etc. My YTD total stands at 2177.
Musical accompaniment was provided by The Pat Metheny Group's Last Train Home, and Kevin Welch's Early Summer Rain which opens with "I dream with my eyes open, I see with my eyes closed..."
Posted by Al at 12:37 PM