Lower Sudbury & Assabet to Rt. 2 and Back 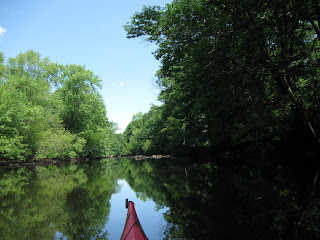 Late this morning, under a rapidly improving June sky, I launched into the Sudbury River and paddled downriver to Egg Rock. I found that the 'ghost ship' was slowly migrating upriver and still not secured to anything... 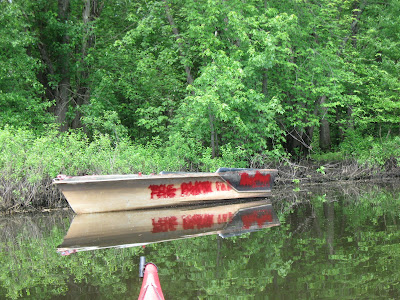 While it's not the most attractive boat, it still floats and appears to be seaworthy.
At the Calf Pasture, a brief shore raid was conducted to cleanup after some shore fishermen. I then relaunched and headed upriver on the Assabet. Water levels are the lowest they've been in quite a while. In fact, most of the river bottom is visible thus leaving the Assabet with few secrets. I spent a good deal of time poking around recently eroded areas of riverbank in my continuing quest for hand-tooled pieces of stone. In that regard I had no luck, but I did manage to find a machine tooled piece of cast iron from the distant past. I believe it is a piece of a railroad car coupling device from the late 1800's or early 1900's. Here are two views of it... 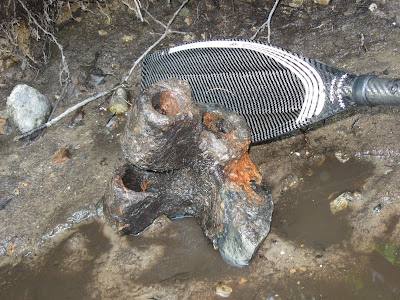 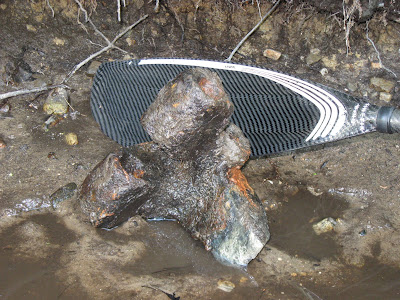 It was found below the old Reformatory Branch railroad grade just downriver from a long gone bridge over the Assabet. This rail line was built in 1879 and shut down in 1927. Harold I. Judkins wrote an article about his memories of the Reformatory Branch in which he mentioned coal being brought to the prison twice each month in 20 four-wheel link and pin dump cars. The article appeared in the B & M Bulletin Spring 1980 edition and was titled I Remember Reformatory Station. Perhaps this coupling device came from one of those coal cars?
Trash was mostly old stuff recently exposed due to falling water levels. Plastic bags and more glass bottles than usual. Biggest bottle was a half-gallon Jack Daniels jug and the smallest was a medicine-sized bottle labeled Grand Union Tea Company.
Wildlife observed were mallards, Canada geese, moscovy ducks, and a hairy-legged spider the size of my hand. This guy could walk on water, quite fast, too! Numerous songbirds, pleasantly, made their presence known as well.
A little ways past Route 2, I turned around and headed back downriver to Egg Rock then up the Sudbury River to my takeout location.
My trash count for the day was 54 pieces and they assembled on the beach for this group photo... 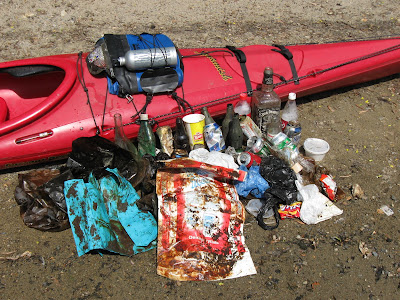