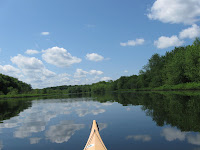 Some rare sunshine greeted those that got out on the river today. The launch at River Road was the busiest I've ever seen it. We all had heard that a brief window of nice weather was there for the taking. Once on the river, I headed upstream and soon started finding trash in the area of the Route 20 bridge project. The contractors have made good progress and it was good to see this rugged workboat standing at the ready... 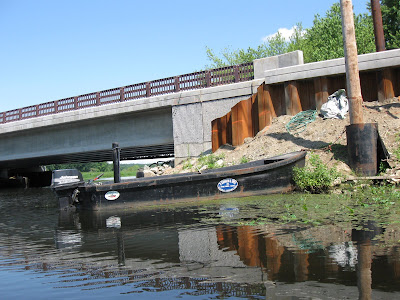 After passing under the old Central Mass Railroad trestle, I scanned the western sky for building clouds and took in this view of Nobscot Hill... 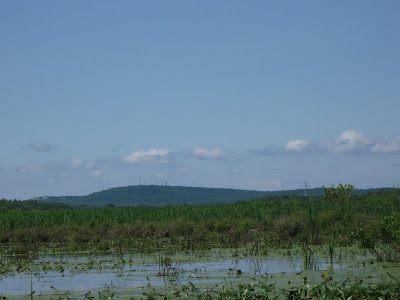 As I approached the point where the river takes a hard right and a trail comes down from river left, numerous Heineken beer bottles, Slim Jim containers, and 'D' cell batteries were recovered. The area behind Wayland High School was free of trash and aside from one plastic bottle at Indian Point, there wasn't any additional trash until I had passed the outlet for Heard Pond and rounded up five more.
Shortly after turning around, I paddled through this shady grove... 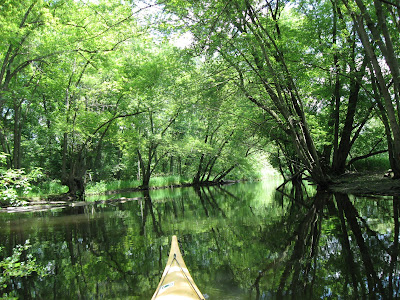 At Indian Point two kings were in a minor dust up. An eastern kingbird and a belted kingfisher didn't seem to want to get along. However, just a little further downriver this pair seemed to be enjoying each other's company as well as the great view they had... 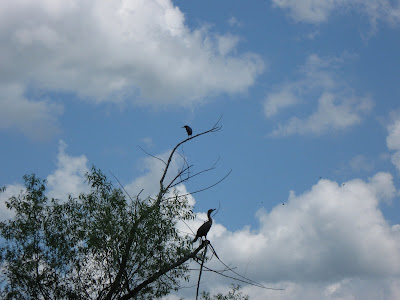 I believe it's a green-backed heron on the upper perch and a cormorant on the lower branch.

Enjoyed listening to an old Cream tune today and appreciated the lyrics as I had never before..."Tales Of Brave Ulysses"

by Eric Clapton and Martin Sharp

You thought the leaden winter would bring you down forever,
But you rode upon a steamer to the violence of the sun.

And the colors of the sea blind your eyes with trembling mermaids,
And you touch the distant beaches with tales of brave Ulysses:
How his naked ears were tortured by the sirens sweetly singing,
For the sparkling waves are calling you to kiss their white laced lips.

And you see a girl's brown body dancing through the turquoise,
And her footprints make you follow where the sky loves the sea.
And when your fingers find her, she drowns you in her body,
Carving deep blue ripples in the tissues of your mind.

The tiny purple fishes run laughing through your fingers,
And you want to take her with you to the hard land of the winter.

Her name is Aphrodite and she rides a crimson shell,
And you know you cannot leave her for you touched the distant sands
With tales of brave Ulysses; how his naked ears were tortured
By the sirens sweetly singing.

The tiny purple fishes run lauging through your fingers,
And you want to take her with you to the hard land of the winter.


Also in my thoughts today was good-hearted uncle that passed away yesterday. May he have safe passage to the next stop in his journey.

Arrived back at my takeout location with 42 pieces of trash. Of these, 24 were recyclable (17 redeemable) and 18 were misc. rubbish such as a mylar balloon, plastic bags, plastic gloves, and styrofoam fast food containers. The group assembled for this photo... 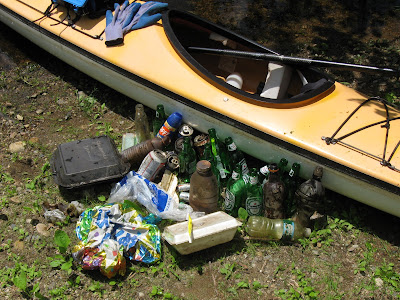 Tom would have chuckled over "Naked Ears" while he queried as to who was this Ulysses dude?