Sudbury River - S. Bridge to Lee's Bridge and Back 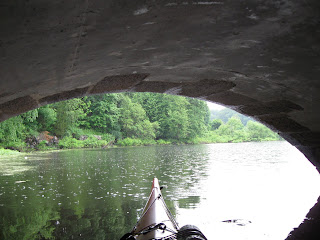 As I sat in my boat having a snack, under the smaller of two portals at Lee's Bridge and looked downriver, the sky began to brighten. The trip upriver to this point had been in a gentle but steady rain and, for the most part, I had the river to myself. Others seen working the river today were tree swallows with their blue iridescent backs flashing as they performed their aerial acrobatics, eastern kingbirds displaying their unique hovering skills, a few musquashes swimming here and there, and, as usual, the stoic blue herons keeping sentry. Red-winged blackbirds were present but didn't do too much flying while the rain was falling. At the far end of Fairhaven Bay two gentlemen sat in lawn chairs under the trees while they fished. They, like me, weren't going to let a little rain keep them indoors!
Today's view across Fairhaven Bay... 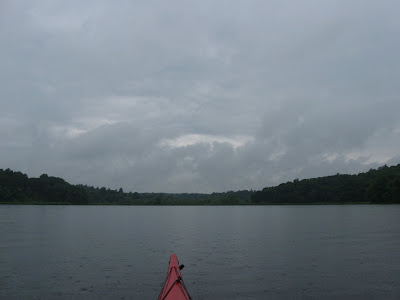 Both sides of the river were decorated with floating water lilies such as this one... 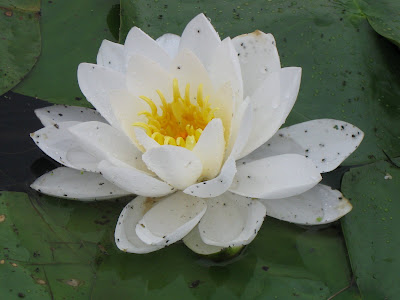 Trash started with a Coors Light can followed by an empty styrofoam cup proudly touting its ability to 'Keep America Runnin'. Next was an empty 32-ounce plastic bottle of Gatorade Fierce that referred to itself as 'Bring It'. Whoever drank it was probably too charged-up to properly dispose of the container before they began 'Bringing It'!
At Heath's Bridge, I came upon the usual bounty and the rescued orphans briefly posed on the beach before going below deck... 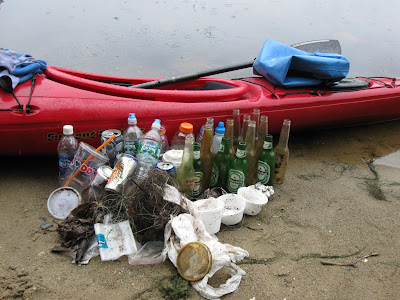 Included in today's haul were several large clumps of monofilament fishing line, bait tubs, beer/soda/water/coffee containers and plastic bags. All the fixins for a nice day of shore fishing! The gang of 41 pictured here would later be joined by another dozen or so which resulted in 53 pieces of trash for the day. Of these, 37 were recyclable (29 redeemable) and 16 were misc. rubbish consisting of the fishing line, styrofoam, plastic bags, etc. My YTD total stands at 2328.
Posted by Al at 4:05 PM