SuAsCo to Casco and Paddling to Pedaling

Mrs. Trashpaddler had to be pleased, for what was supposed to be a Saturday of paddling the waters of Casco Bay somehow became a day of pedaling the scenic roadways of Peaks Island. The paddling events were the Race Round Peaks Island and the Race to Outer Green, events I've greatly enjoyed participating in the past and had been looking forward to this year. Then two days before the event, the event's organizers decided to cancel both as weather forecasters were predicting a good ole nor'easter. That left us with two options: stay home and lose the cost for the room we had reserved or 'play the hand dealt us' and head up to Casco Bay.
Two and a half hours later, while a steady rain fell outside, we were browsing the shelves in South Portland's Nonesuch Books before heading to the dock and the ferry to Peaks. I hit paydirt when I found The Wildest Country, Exploring Thoreau's Maine by J. Parker Huber and published by Appalachian Mountain Club Books. The book is a second edition of a book first published in 1981 and the author includes the following introduction: "This book is an invitation. It invites you to gain an appreciation of yourself, Maine, and Thoreau. It invites you to follow Thoreau's travels on foot and by canoe. It invites you to see the North Woods through the eyes of Thoreau, who, in my opinion, is still that region's interpreter extraordinary, and it asks you to compare and contrast his perceptions with yours. It invites your additions and criticisms. It invites itself to be part of your journey, to be read as you go along. It invites you to be stimulated by this world. Lastly, it invites you to conserve and cherish the land and wildlife. Though the country has changed since the mid-nineteenth century, its character remains the same for you as it did for Thoreau. It is still a frontier for the mind, heart, and spirit."
That invitation along with glimpses of fantastic photographs and maps had me leaving the bookstore quite content that I'd found a good read.
After a short ferry boat trip from Maine's largest city to one of its many islands, we were hunkered down in our room for the impending storm.
The next day we awoke to find a brightening sky and rapidly drying conditions. Quickly, we grabbed some coffee and jumped on our bikes in hopes of getting in a ride round the island before the weather could take a turn for the worse. Instead, we enjoyed a great day of bicycling all around the island that the Indians called Utowna, which is said to mean "rocky place". It doesn't get much better than pedaling along Seashore Ave while looking out over the wildroses, rocks, breaking waves and bobbing ducks, to the outer islands of Casco Bay. Late in the afternoon we witnessed the Portland Fireboat demonstrating its water cannon capabilities as part of the Peaks Island community's PeakFest celebration... 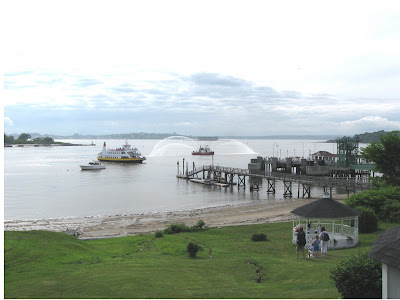 Each time I visit Casco Bay it occurs to me how similar it is to Boston Harbor and my hope is to someday see Boston's islands provide visitors similar accomodations.
Posted by Al at 7:04 PM

You enjoy becoming a modern day Thoreau and following his lead.

I enjoy Democritus and like you study the words given freely in the past.

"By desiring little, a poor man makes himself happy."