Quiet Afternoon on the Quinebaug 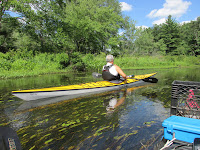 Captain V. Dangerous (at left) of the Adirondack Pirate Paddlers was in the neighborhood for a few days and looking to get in a paddle.  This provided an opportunity for me to introduce him to the Quinebaug River Trail which he'd never heard of before.  I'd only stumbled upon this nice stretch of river last year and was eager to visit it once more.  The river trail is considered to be within the upper part of "The Last Green Valley"   (which stretches from south central Massachusetts down into northeastern Connecticut).

The creation of the East Brimfield Lake Flood Control Project in 1958 allowed for the approximately 5-mile long Quinebaug River Trail to remain relatively undeveloped.  In fact, what development there was prior to 1958 was torn down or relocated.  At the heart of the project is this structure situated where the Quinebaug River passes between 2 hills... 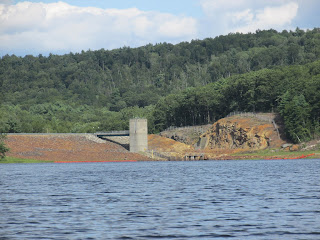 The dam created East Brimfield Lake, and enlarged Long Pond located on the other side of Route 20.
In the event of excessive flows, floodgates can be closed to hold back the Quinebaug River and fill the valley with water thus protecting downriver communities from devastating floods.
The project was built by the US Army Corps of Engineers and is maintained by them.

So yesterday the Capt'n and I left one vehicle at the Route 20 boat launch at East Brimfield Lake and then drove to Holland Pond where our boats were launched into the Quinebaug River at the point where it exits the pond.  About 1 mile downriver is the first designated canoe rest area and it is located on Curtis Island.  In July of 1675 this island was the site of a Nipmuc Federation Council where various Nipmuc sachems grappled with how they should deal with the insurgency known as King Philip's War.  Ephraim Curtis, a 33 year old trapper/hunter, had been sent on an intelligence gathering mission by the Massachusetts Bay Colony and soon found himself in the midst of a very volatile situation.  Fortunately for him, he kept his wits about him and lived to see another day.  Unfortunately for the Nipmuc Federation, their decision to join with King Philip's forces would ultimately result in their defeat.  In my opinion, there wasn't really any "good" decision the Nipmucs could have reached.  Curtis' first-hand account of his mission can be found here.  He is believed to have crossed the Quinebaug where the present-day bridge is located going from river right to river left.

Continuing downriver we saw this Cardinal flower, a bittersweet reminder that Summer is getting long in the tooth... 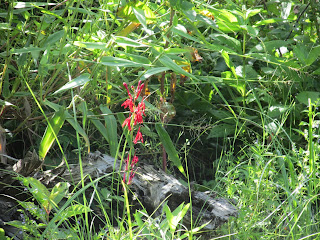 Before reaching East Brimfield Lake, the river passes where the Springfield Trolley line and the partially built but never operated Southern New England Railroad crossed the river.  After passing by these locations, the spot where the June 2011 tornado roared across the river is reached, and its effects are still evident... 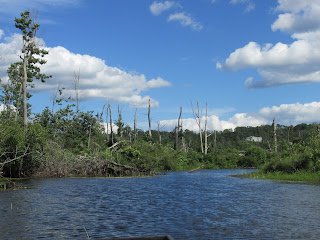 Upon reaching East Brimfield Lake we crossed under Route 20 and paddled another 2 miles up Long Pond to near the Mass Pike before heading back to the takeout.  It was a scenic paddle on a beautiful summer's day.  A fisherman encountered at Holland Pond reported excellent fishing for large-mouthed bass.

Very little trash was encountered with this meager haul being collected from near the various launch sites... 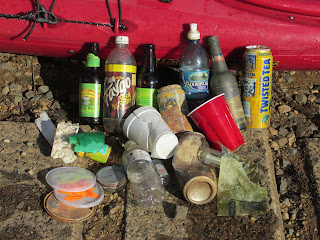 There were 10 recyclable containers (3 redeemable) and 8 pieces of miscellaneous rubbish.
YTD = 3624
Posted by Al at 8:08 PM

My local river. Glad to see you made it out here. I usually stay dry and ride my bike on the rail trail.