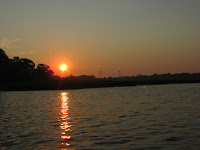 The sun had just climbed above the horizon (at left) as I paddled down the Annisquam River to Gloucester High School where rowers and paddlers would register for this year's Blackburn Challenge.  The event is named for Gloucester fisherman, Howard Blackburn, and it commemorates his desperate mid-winter rowing of a banks dory 60 miles to refuge back in 1883.  Howard Blackburn's principal adversary was bitter cold temperatures that took a costly toll on his fingers and toes.  Nonetheless, he toughed it out and prevailed.  Participants in yesterday's event faced the opposite extreme....HEAT!...and plenty of it!!!  The questions going through my pre-event mind were "is it prudent to wear a Personal Floatation Device (PFD) while exerting in this kind of heat?" and "do I have enough drinking water onboard?"  My answers: PFD would be strapped to my deck and 100 ounces of water proved adequate.

As participating boats congregated near the starting line, a bit of a traffic jam occurred when human powered boats of all types were passing under a raised drawbridge (most probably a "don't do")... 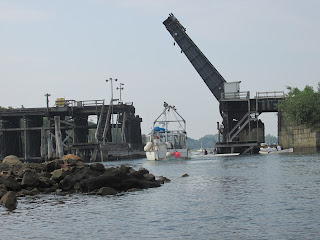 The patience of the working boat's skipper was put to the test.

The bridge tender left his air-conditioned station to take-in the scene from his balcony... 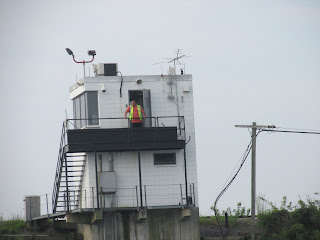 And then we were off in our attempt to paddle or row the approximately 20 miles around Cape Ann.
The first 3 miles going up the Annisquam were hot.  From Annisquam Light to Andrews Point was hot.  Going across Sandy Bay was hot, though the first thing resembling a breeze was felt.  Emerging from Straitsmouth Gap the warm breeze strengthened and was a definite help to this paddler.  Then came the longest stretch of the event from Thacher Island to Eastern Point.  This is where many participants hit the wall, so to speak.  It was during this stretch that I became a bit delusional and thought I saw two guys calmly paddling a Gruman canoe.  I stopped paddling, reached for my camera, and snapped this photo as proof... 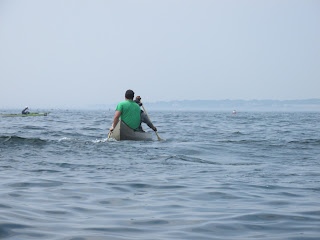 These guys made it look easy.  Something tells me it wasn't.  Nice work on their part!

After rounding the Dog Bar Breakwater and entering Gloucester Harbor, the sight of Gloucester's recently built wind turbines was inspiring.  However, crossing the mouth of the Western Harbor provided the hairiest moment of the event, for me, when 4 powerboats were rapidly approaching from starboard and a whale-watch boat was bearing down on my portside.  I really believe it was only the nearby presence of a Gloucester Police boat that persuaded the bigger boats to slow down just enough to let me live another day.

No sooner had I crossed the finish line and hit the beach then several claps of thunder rang out and a lighting bolt reached down from the clouds.  This must have been the final insult for those participants still out on the course.
Shortly I was enjoying some pulled pork, Ipswich Ale on tap, and great live music.  Only later did I find out that I hadn't died and gone to heaven.

These lucky bits of trash (rounded up near the start line) got a free ride around Cape Ann yesterday... 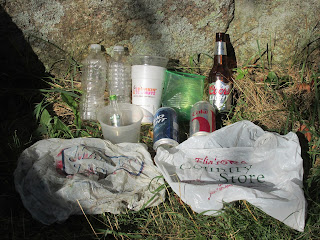 Late that same night some cooler air finally entered our tent at Cape Ann Camp Site, and Sunday morning Mrs. Trashpaddler and I enjoyed a glorious breakfast at the "Morning Glory" coffee shop which looks out on Gloucester Harbor.  The 7-day heat wave was over!
Posted by Al at 4:49 PM

Definitely a grueling race with the heat-and the wind once we passes Straightsmouth. I'll do it again though. Thanks, Mark Emig

Mark, Was that you at the Morning Glory on Sunday morning? If so, I saw your wherry parked along the boulevard. Nice looking boat. Hope to see you at next year's event when, hopefully, we'll find things as cool as it was in the coffee shop.

I'm impressed! It sounds like extreme conditions, I'm glad no one was hit by lightning at the end...