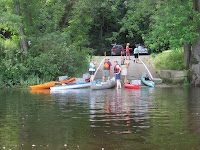 We launched from a very nice park located at a bend in the river, and patrolled upstream on the east side for less than a mile before crossing over to the river's west side.

Mrs. Trashpaddler seemed happy to be participating and back in her favorite boat... 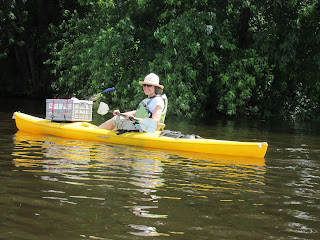 We encountered several pockets in the shoreline where good amounts of flotsam had accumulated.

Ron's canoe was carrying the bulk of the load as we prepared to go ashore... 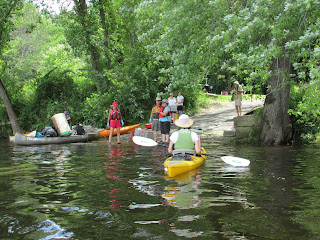 The gang posed for the camera before the sorting process commenced... The day's haul broke down as follows: 199 recyclable containers and 342 pieces of miscellaneous rubbish such as a plastic drum, pvc pipe, and old doll, and numerous pieces of Styrofoam.

A barbecue followed the patrol and we were amazed at how comfortable the park stayed with a nice breeze off the river.

Next month's targeted river is the Squannacook.
Posted by Al at 8:19 PM

This was my favorite trash patrol to date! Maybe the BBQ at the end had something to do with it. Enjoyed meeting Mrs. Trashpaddler as well. Looking forward to next time.

Denise, It really was a nice time on the Merrimack. Kudos on the coordination. The location was ideal and the BBQ was great! Salt on watermelon? Still trying to wrap my head around that one ;)

Wow - that's a lot of trash. Kudos to you (as always) and to the NHAMC - they are a great group.