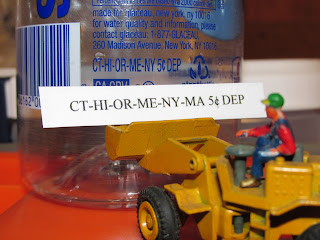 The job is almost done.  A little more than two weeks ago the Massachusetts Senate voted overwhelmingly to include non-carbonated plastic beverage containers in our state's Bottle Bill.
Senate Bill 1588 was brought forward by Cynthia S. Creem of Newton who was joined by 35 legislators and/or citizens supporting its passage.  It's my understanding that an amended version passed the Senate on May 22, 2013.
Now, if the Massachusetts House of Representatives does the same, the updated bottle bill could be signed into law by Governor Patrick and the letters "MA" would proudly join those representing other environmentally progressive states.
Gazillions of plastic bottles once containing water, energy drinks, or iced-teas would finally have a bounty placed upon their heads.
To help insure this happens, folks might want to encourage their state representative to support this long overdue measure.
I'm willing to bet we'll see a lot less of this...

...in our state's waterways.

in 2010 NY added water bottles or any water based drink w/ no sugar.

here, we still need to improve the situation by adding non-carbonated sugary drinks such as gatorade bottles as well as wine and liquor bottles

I always go to the redemption center because there's no limit, they count them and they take everything that says NY on it with no complaints. the stores w/ the machines it really depends on the attitude of the person they hired to run the bottle department. some of them just don't seem to realize the only reason they have a job is because of the bottle bill legislation, while some are very friendly and helpful.

nice site btw. I always bring a bag with me when I go for a nature walk.

Thanks for the info Anonymous, I didn't realize that drinks such as Gatorade were exempt in NY.
Agree with you about the redemption centers being best. Here in Mass., they're almost extinct.