Paddling the Quinebaug to Indian Island 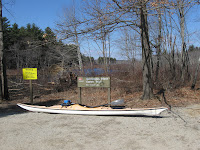 After recently reading The Indians of the Nipmuck Country in Southern New England, 1630 - 1750 by Dennis A. Connole, I was compelled to visit one location that played a pivotal role in the book and the fate of the Nipmuck people.
At the outset of "King Philip's War" (named for Wampanoag leader Metacomet aka Philip) Massachusetts officials needed to know if the Nipmuck tribes were likely to join forces with the Wampanoags.  In mid July 1675 Governor John Leverett sent 33-year old trader Ephraim Curtis into the Nipmuck Country to find out firsthand.  Curtis and his small party numbering 12 found only abandoned villages until they finally located a large encampment of Nipmucks on a 4-acre island in the Quinebaug River.  As Curtis approached the island from the east, he was prevented from crossing the river by 40 warriors.  Keeping their cool, Curtis and his party ultimately persuaded the warriors to allow their passage across the river to meet with the Nipmuck sachems.  Once across the river and on the island they were, once again, surrounded by an even larger force of warriors.  After what must have been a harrowing time for Curtis and his men, the sachems agreed to a meeting.  There were 6 sachems: Muttaump (Quabaug tribe), Konkewasco (Quabaug tribe), Willymachem, Upchatuck (Nashaway tribe), Keehood (Wabbaquaset tribe), and Nontatouso (Wabbaquaset tribe).
Curtis would return to the island one more time towards the end of July, but any hope of a continued state of peace between the Nipmucks and Colonists would soon be gone for reasons Connole explains in his book.
Locating the island required going to one of Connole's sources The Bay Path and Along the Way by Levi Badger Chase.  In addition to a very detailed description of the location, Chase provided this map which shows the island near the bottom right.
So, this morning as the sun was winning the day, I traveled to the town of Holland, Ma and launched into the Quinebaug River where it exits Siog Pond (aka Holland Pond) at Pond Bridge Road (opening photo).  The Army Corps of Engineers maintains the Quinebaug River Canoe Trail which runs 5 miles downstream to East Brimfield Lake.  There are 3 rest stops along the way.  The scenery is beautiful and wildlife plentiful.
As I was preparing to get underway, a pair of bald eagles were carrying on in a large pine across Siog Pond.  I would see eagles (perhaps the same ones) frequently over the course of my visit.  Wood ducks and mallards were also plentiful today.  One hawk was seen as well.
Indian Island (aka Curtis Island) was reached after 1 mile and the bridge occupies the location where Curtis crossed the river from right to left... 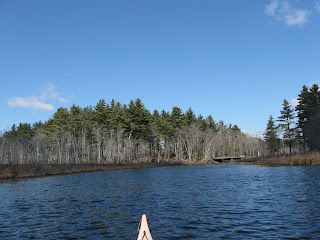 The island would have made an ideal stronghold for the Nipmucks.

As I landed my boat at rest stop # 1 a bald eagle soared overhead... 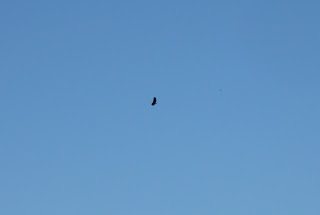 This rest stop provided a nice spot to enjoy lunch protected from the breeze... 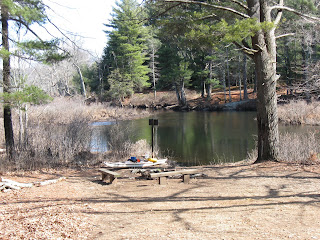 After lunch, I stretched my legs by walking to the island's elevated section and then to the bridge where I crossed to the other side of the river from where Curtis made his approach.  This is the view looking across towards the island... 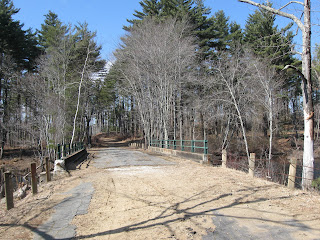 Curtis was surrounded by 40 warriors as he looked across towards an encampment where he estimated there were 200 men and 6 sachems.  Today, by contrast, things were fairly quiet.

Upon relaunching my boat, I encountered the confluence of Mill Brook and the river.  Ascending the brook for a quarter mile or so required pushing over a couple of beaver dams before returning to the Quinebaug and continuing downstream to rest stop # 3 where I turned around... 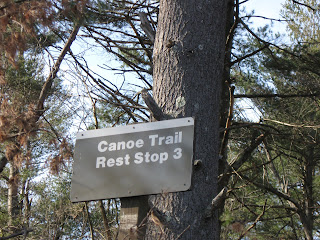 Pieces of trash encountered along the way numbered 39... 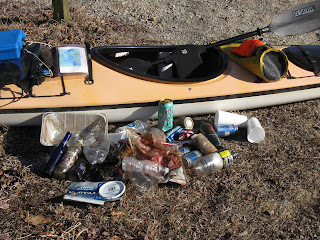 This haul was composed of 18 recyclable containers (6 redeemable) and 21  pieces of miscellaneous rubbish such as aluminun foil, plastic bags, styrofoam cups.  Most of the trash was found at rest stop # 1 and only 12 pieces were found in the river itself.  YTD = 843

Both on my way to this launch site and on my way home, I passed areas where last June's tornado had cut a wide swath of devastation through the area.  Here it is, 9 months later and the landscape  looks other worldly... 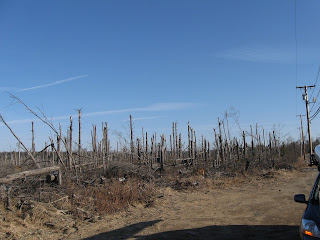 Nice report, I'm going to look into reading the books you referenced. have you read "Changes In The Land" by William Cronon?

I usually paddle the Quinebog Trail a couple of times a year and then extend the trip up Long Pond to the Mass Pike. The 12 mile round trip is very ice and good training.

Thanks Chris, The book you mentioned "Changes in the Land" looks interesting. I'll check it out. Thanks also for the info regarding being able to paddle into Long Pond. Today I learned that a hotel/restaurant called "The Anchor" once stood at the spot where I launched my boat. Bad floods in 1955 led to flood control measures which dislocated many folks from their homes in the Lake Siog area.
Old pictures can be seen at this army corp link: http://www.nae.usace.army.mil/recreati/ebl/BlogLastPagev3.pdf
or visit the army corp. site for Quinebaug Canoe Trail (history page)

Thank you for sharing. my husband is on vaction from work so I have been searching for a new place to kayak, with your help I believe I just found our adventure date thank you again!!!! Happy safe paddling all!!!!