Strange Day All Around 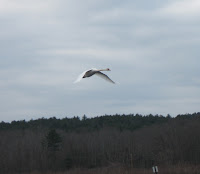 It had been awhile since I last worked a "graveyard" shift so, early this morning, having worked through the overnight, I found myself looking forward to getting out of work and possibly getting out onto some salt water.   My plan was to explore the Saugus River for the first time, taking advantage of a 10:30 am high tide.
However, strange things began happening around 5:30 am when an accident involving a truck carrying a waste container occurred outside of the facility where I was working.  I'm told that the truck's clutch failed and that the driver had to bail out before going over the side of a hill.  The truckdriver was taken by ambulance to a hospital for injuries sustained in jumping from the truck's cab.  The truck and container ended up in the trees... 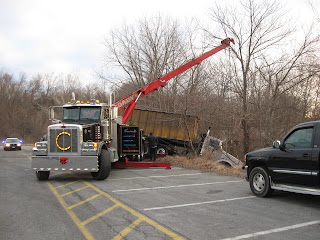 Hopefully, the driver will make a full recovery.

I left work looking for some breakfast and a place to launch my boat.  I found breakfast OK, but didn't have any luck finding a boat launch that included parking.  After several attempts at locating a launch, I gave up and drove to waters closer to home.  Sherman's Bridge became my launch site and shortly I was heading up the Sudbury River and watching an eagle soar above the vast expanse of river and marsh.
There were also numerous ducks, some of which may have been buffleheads or perhaps common goldeneyes.
A northern harrier was also seen.
But for most of my time on the water, I was in the company of 4 mute swans such as the one pictured in the opening photo.
At the Route 27 bridge (downstream west side) a brief shore raid was conducted that netted the majority of today's trash from the embankment below the roadway... 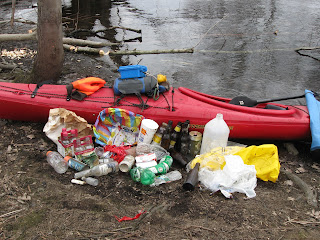 There were 27 recyclable containers (14 redeemable) and 16 pieces of miscellaneous rubbish such as balloons and plastic bags.  It should be noted that only 4 pieces of trash were recovered from the river proper.
YTD = 673

As it began, the day ended on a strange note as I paddled downriver in the vicinity of the earlier mentioned mute swans.  Upon hearing a sharp pop, I saw one of the swans struggle briefly before going limp in the water.  Looking closer, I saw a green boat with a hunter in it and shortly a second shot rang out killing another swan.  The hunter was actually a U.S. Fish and Wildlife officer and he explained that Fish and Wildlife conducts a program aimed at reducing the numbers of mute swans as they are considered an introduced/undesirable species.  The officer was earnest and straightforward and his killing of the 2 swans was done in a quick and humane manner.
Nonetheless, it made for a strange ending to a strange day!  I'm left wondering if the swan in the opening photo was one of today's unlucky ones.

Nice to know that you and SuAsCO fellow paddler Lisa conduct a program aimed at reducing the numbers of littered trash as they too are considered an introduced/undesirable species.

If we need to take action to reduce the number of beautiful mute swans (albeit a necessary evil), we surly need to eliminate littered trash especially in our waterways.

Thank You for all you do to clean up found trash and to propagate the idea that each of us can do our part (as litter pickers) responsibly at the same time as we enjoy the great outdoors.

Looks like some beaver activity behind your trash shot there (!)

That's an interesting way that the U.S. Fish and Wildlife dept. deals with invasive mute swans. I know of the damage that they can do, as they get very aggressive down in my neck of the woods.