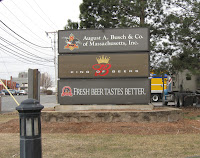 The tired and beat-up looking beer keg found in the Sudbury River on February 10th is finally home.  It was delivered to the Anheuser-Busch facility in Medford, MA (photo at left) this past Wednesday, ending what, most likely, was a long and interesting odyssey: possibly filled with beer at the Anheuser-Busch brewery near the Merrimack River in New Hampshire; found floating in the Sudbury River in Wayland, MA; returned to Anheuser-Busch at their facility near the Mystic River in Medford, MA.
Unlike most of the beverage containers I find in the river, this one's owner actually wanted it back despite its integrity having been compromised.  By that I mean the 15.5-gallon keg was found nearly full of river water and there were three cracks in the stainless-steel shell.  It took six days to thaw and drain the majority of water out of the keg. (Note: Freezing temperatures slowed draining process as keg was not allowed in house.)

Here is a photo of the keg in question... 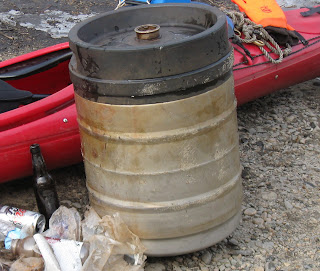 The date stamp on the container indicated it was manufactured in 1984.  That leaves me to wonder just how long kegs are kept in service and consequently how many gallons of beer a keg may convey over the course of its useful life.

I knew very little of "kegology" before finding this keg.  Since adopting it, I found out the following:

Thanks to Anheuser-Busch Customer Relationship Group and August A Busch Co. of Massachusetts for their help in properly disposing of the beer keg.

Just what we do need. More companies using multiple use re-use containers and accepting the containers (packaging) back for re-use or recycling.
I remember when bar bottles were washed and refilled. Don't think they are used more than once any longer.

No empty kegs on your street? You can always redeem this CLEAN UP COUPON @ http://litterwithastorytotell.blogspot.com/2012/02/clean-up-coupon.html

I really appreciate the way you choose a topic, beer keg it's an interesting topic for me. You did it.