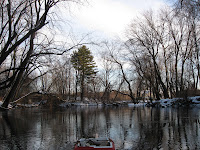 My objective today was simple; drive along the Nashaway Trail and then paddle to the confluence of the Nashua River's north and south branches, where the Nashaway tribe of Nipmuck people once lived.
What I found less than simple were the many historical loops that seemed to be connected to this location.
When I paddle the Assabet River in Pompositticut, I frequently launch at Russell's Bridge (White Pond Rd.) and have learned that this was the early route to Lancaster via Pompositticut (Stow) Lower Village and Route 117.  After recently reading The Indians of the Nipmuck Country in Southern New England by Dennis A. Connole, I learned that this route was called the Nashaway Trail and that the Nashaway chief sachem Sholan (aka Nashacowam) may have traversed the trail in 1641 or 1642 enroute to Watertown (possibly at the falls on the Charles River known as Cowate) to do some trading with a young English trader named Thomas King.  Sholan invited King to visit Nashaway and encouraged him to set up a trading post.  King visited Nashaway and did subsequently set up a trading post on the southeast slope of George Hill, located about a mile from the confluence of the Nashua River's north and south branches.  The confluence is pictured in the opening photo as seen looking downstream from the north branch.  The combined Nashua River passes to the left (north) under Center Bridge Road while the south branch from Clinton and Wachusett Reservoir enters from the right.
According to Connole, after several good years, King sold the trading operation to John Prescott, the man who is credited with founding the community of Lancaster.  Prescott ultimately sold the trading operation to John Tinker and this is where several connections occur.  Nanamcocomuck, eldest son of Passaconaway, great sachem of the Pennacook tribe, who often resided near Pawtucket Falls in Lowell married into the Nashaway tribe and became a sachem of the nearby Wachusetts.  In his dealings with John Tinker at Nashaway he indebted himself and wasn't able to repay the growing debt.  Tinker ultimately had Nanamcocomuck imprisoned in 1659 for failure to pay and Passaconaway was only able to free his son by paying Tinker.  Nanamcocomuck left for Maine after his release from prison and, it is said, never returned.  His son, Kancamagus would, later, take some measure of revenge against English settlers in New Hampshire and Maine.  Food for thought the next time driving along the scenic Kancamagus Highway.
Connole's account ties in nicely with that in another book The Bend in the River by John Pendergast who identifies the property sold to pay off Tinker as Wickasee Island.  This island was very dear to Passaconaway and his family.  See my post about Passaconaway's other son Wannalancet and his final resting place near Wickasee Island.
As to the Nashaways, decades of good relations with the settlers came to an abrupt end with the outbreak of the conflict known as King Philip's War in 1675/76.  The war led to their demise in this region.

Anyway, back in the present, I launched just as the sun was beginning to break through the clouds at Seven Bridge Road (Rt. 117 in Lancaster) and headed upriver.  At one of the first large blowdowns across the river, there was quite a bit of trash (mostly plastic and glass bottles)... 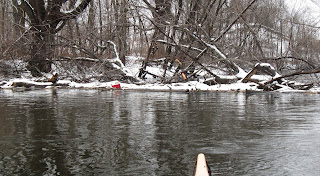 This one location nearly filled my boat with over 100 pieces of trash including 10 one-quart glass beer bottles.  As I finished my work there, both the day and blowdown were looking better... 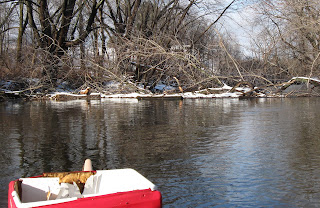 Continuing upriver, I came upon these wood ducks that were less shy than most others of their kind I encounter... 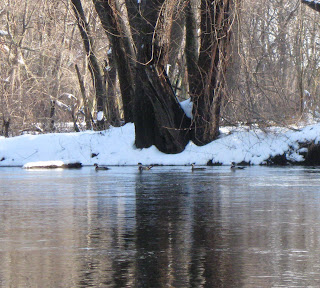 Also seen and heard today were armies of robins, a hawk, perhaps a mink, and the unmistakable calls of red-winged blackbirds.

Nearing the confluence of the north and south branches I passed under Center Bridge Road and found the north branch more inviting or less obstructed by blowdowns.  I paddled up to where the B & M RR's Worcester, Nashua, and Portland branch crosses over the river... 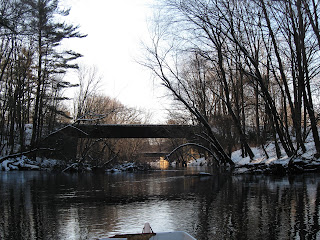 Today the line is operated by Pan Am Railways.
The Route 70 bridge can be seen in the distance.  To my immediate left, through the woods, is the Old Settler's Burial Field, the oldest cemetery in Lancaster and reported to have graves dating to the 1600's.

My trip downriver was a swift one with some good current.
Back at Seven Bridge Road, my trash haul posed in the strange white stuff that coated the ground... 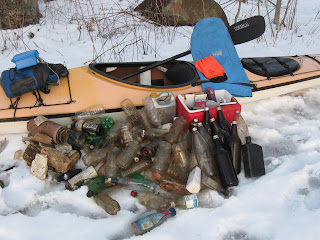 There were 82 recyclable containers (2 redeemable) and 63 pieces of miscellaneous rubbish such as styrofoam, nip bottles, spray cans, and a cooler.  Note how nearly all of the plastic and glass bottles have lost their identifying wrappers.  The glue holding the wrappers dissolves in water.  This could have unintended consequences if Massachusetts ever expands the bottle bill to require a deposit on non-carbonated beverage containers. A permanent mark in the plastic or glass would work better.
Today's haul of 145 combine with 21 from a recent Fort Pond Brook terrestrial patrol to bring my YTD total to 1009.﻿
Posted by Al at 11:45 PM

Don't know which I am more impressed with, the amount of trash collected, or how you managed to get it all into your Kayak.

We really enjoy the history that you include in some of your blogs. Looks like you managed to paddle all winter.

Anonymous, Thanks. This winter sure was a strange one! I doubt I'll ever see another like it!