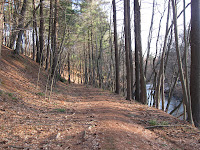 On the occasions when I've launched my boat into the Assabet River at the Acton Canoe Launch, the steep ridge encountered in  the first half mile has always caught my eye.  But, because the river moves swiftly around the bend, and there are shallow spots to avoid, only a fleeting glance is usually obtained.  Near the base of the steep ridge there appears to be an old railroad grade or possibly a dirt roadway.
Yesterday, I hiked in from Route 62 along the intriguing pathway seen in the photo at left.  To the right is the Assabet and to the left is the steep ridge presently called "Forest Ridge".  About 50 to 100 yards in are the remains of some old structures.  The first one encountered is this metal shed nestled into the ridge... 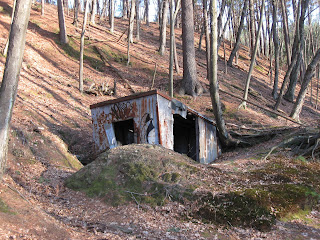 Further along is this concrete foundation and wood timber frame... 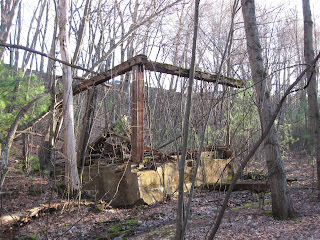 So, what were these buildings and could they have been related to the Powder Mills for which much of the area is named?  A search of the internet found mention of a paper presented by Marian Harlow Wheeler to the Concord Women's Club in 1985.  It is titled Pratt's Powder Mills alias "The Acton Powder Mills", "The American Powder Company", "The American Powder Mills", "The American Cyanamid and Chemical Company".   A visit to the Maynard Public Library allowed me to read this paper and thereby learn considerably more about the Powder Mill than I previously knew.
Nathan Pratt founded the operation around 1833 after having learned the art of making gunpowder at a powder mill in Barre, MA.  What drew him to this location was the river's available water power and the glacial eskers which provided natural containment in the event of explosions (which occurred frequently). It wasn't a question of if there would be an explosion but rather when.  Therefore, the operations would be spread out amongst 25 buildings on 400 acres situated along a 2 mile stretch of Route 62 in the towns of Concord, Acton, and Maynard; an area roughly from the present-day Valley Sports Skating Arena to the old Victory Shopping Plaza location.   Buildings were on both sides of the road: traditional black powder made on the south side of the road and the "newer" smokeless powder made on the north side.
In addition to potassium nitrate and sulphur, large amounts of charcoal were required and produced on site from mostly willow trees.    Walnut or alder trees were also used at times.
Much of the product was used in quarry operations although, during World War I, all of their production was under contract to the Russian Government.

Over the years there were numerous and often fatal explosions.  Wheeler included two of Henry David Thoreau's observations.  This, the second of those two, is from his June 1, 1853 journal entry:   "...The news of the explosion of the powder mills - was not only carried seaward by the cloud which its smoke made - but more effectually - though more slowly by the fragments which floated thither by the river - Melvin yesterday showed me quite a pile - of fragments - some short pieces of larger timber - still black with powder - which he had saved as they were drifting by - No body takes the trouble to record the consequences of such an event - and some no doubt were carried down to the Merrimack - and by the Merrimack - and by the ocean - till perchance they got into the Gulf Stream - and were cast upon the coast of Norway - covered with barnacles - or who can tell what more distant strand? - still bearing some traces of burnt powder - Still capable of telling how and where they were launched to those who can read their signs...Mingling with wrecks of vessels which communicated a different tale, this wreck of powder-mill was cast up on some outlandish strand - and went to swell the pile of drift wood collected by some native - shouldered by whales.  Alighted on at first by the musk-rat and the peet-weet - and finally perhaps the stormy petrel and the beach-birds - It is long before nature forgets it - How slowly the ruins are being dispersed!..."

Thoreau's comments remind me of present day floatable plastic trash being dispersed in the river.  It is long before nature forgets it.

The powder mill was sold in 1940 to American Cyanamid and Chemical Co. and then again in 1954 to Dewey and Almy Chemical who used it for synthetic rubber production.  One of the last operating components of powder mill is the small hydro-electric plant which produced electricity for the operation.  Today,  Acton Hydro occupies the building which has been reworked to, once again, produce electricity from the river's flow.

The ruins I visited yesterday are most likely some of the few that remain from black powder operations on the south side of the road.  The pathway is probably much the same as it was during the powder making days.  I could almost envision a mule-pulled wagon hauling the hazardous cargo along the base of the ridge.

This view of the river from the wagon path shows how low water levels are in the Assabet these days... 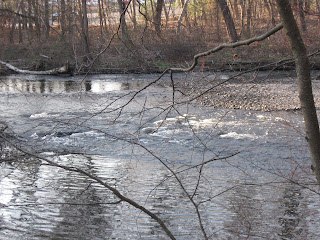 That wonderful Throeau quote gave me shivers-especially as you related it to today's litter.