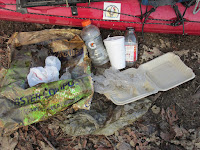 Of the many types of empty food product containers encountered in local and not-so-local waterways, polystyrene (opening photo) is considered by most to be the worst of the worst.

It seems we all know polystyrene is bad news for ourselves and the environment yet, day after day, it gets passed across store counters from merchant to customer as though alternative containers didn't exist, when in fact they do.

Richardson points out that styrene is a hazardous substance, a neurotoxin, causes cancer in lab mice, and is "reasonably anticipated to be a human carcinogen" according to DHHS (US Dept. of Health and Human Services), NTP (National Toxicology Program).

A polystyrene container bearing a # 6 label is not accepted by the town's recycling program. Therefore it either gets buried, burned, or...finds its way into the environment where, for several centuries, it slowly divides into smaller and smaller bits (often mistaken as food by wildlife).

A recent article in the Concord Journal (3/31/16) by Henry Schwan noted that Richardson has been successful in persuading some Concord merchants to support the bylaw.  The general manager of Crosby's Marketplace stated that "Crosby's will sell both polystyrene products and alternatives, and let the customer decide which to buy."

Having such a choice is something most of us will appreciate, and I have faith that most will gladly pay a few cents more for the good of our environment.