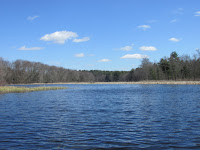 Paddled the Assabet River yesterday in the town of Stow which, coincidentally, was conducting a town-wide spring cleanup of its own.  That explained the bright yellow trash bags seen driving to and from Magazu's Landing.

After launching I headed upriver against a fairly strong current.  Water levels were high and thus trash was on the move.
Early on in the paddle I encountered more empty mouthwash bottles which unfortunately are almost always seen between Sudbury Road and Route 62 in Gleasondale.  There were 23 such bottles today bringing the total so far this year (2016) to 42.  That's a lot of mouthwash in 2.5 miles of river!

Passage thru the box-culvert to Fort Meadow Brook wasn't in the cards due to the lack of adequate headroom.

The high water level did, however, allow access to the long abandoned Boston and Maine Railroad's Marlborough Branch where it approached the village of Gleasondale.  According to the 2nd edition of the The Central Mass. (2008) this old right of way opened in 1850 under the name Lancaster and Sterling RR...even though it never went to either of those towns.  When opened it actually ran from South Acton Junction on the Fitchburg line through Maynard and Stow to Feltonville (Hudson).  Later it was extended to a terminal on Lincoln Street in Marlborough.  The section of right of way pictured hasn't seen a train since the 1930s... 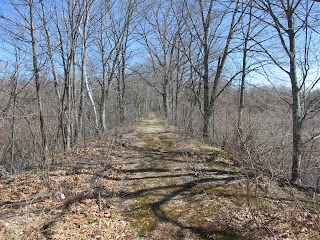 This view is looking east towards Maynard and Acton.  Immediately to the rear of the photo were 2 bridges over the Assabet that brought trains to the Rock Bottom Station on Railroad Ave.  A photograph of this station and the nearby Humphrey Brigham shoe factory can be seen in Stow (Images of America series) by Lewis Halprin, Barbara Sipler, and the Stow Historical Society (1999).  This once bustling locale looks pretty sleepy these days. 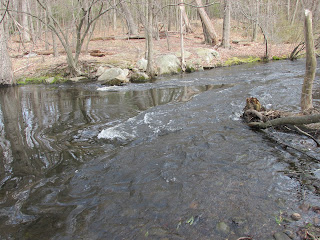 ...I turned about and headed back to the takeout.

Trash recovered on the upstream run... 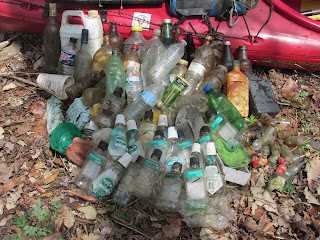 But wait...there's more (trash recovered on the downstream run)... 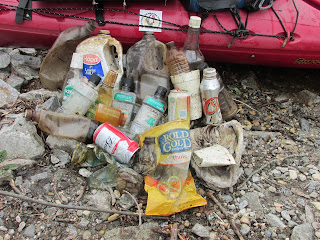 One interesting find was this old amber bottle of Dazzle (bleach)... 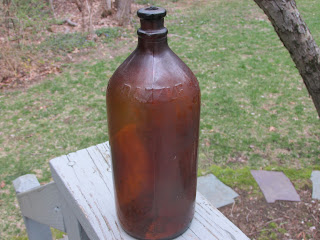 ...found happily floating along.  It still had rubber stopper in place and most likely dates from 1951.   Can only wonder why it decided to go floating about yesterday.  Wanderlust?
Posted by Al at 10:11 AM