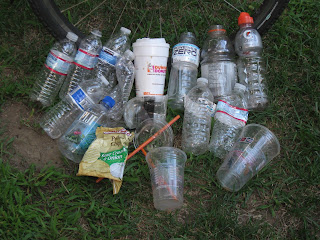 Here in Massachusetts empty plastic containers keep sprouting up all over the place.  The ones pictured above were encountered this past Thursday along a suburban bike path, but they can be seen pretty much anywhere one walks or pedals or paddles.  Unlike similar containers that once held carbonated beverages, these have no 5-cent redemption value.  This year our Massachusetts legislature had another opportunity to fix this discrepancy and help our state raise much needed additional revenue.  The Massachusetts Senate overwhelmingly passed an updated bottle bill that would finally include small containers of non-carbonated beverages.  Governor Patrick supported it.  Municipal leaders throughout the Commonwealth supported it.  Polls showed the majority of citizens support it.  So how, one might ask, could it not clear the final hurdle in the Massachusetts House of Representatives where a majority of representatives "say" they support it?   The answer: Just don't allow it to come to a recorded vote (key word being "recorded").  Voila! The proposed bill to update the bottle bill disappears behind closed doors and won't be heard of for another year.  The bottled water industry is ecstatic and we all know how important that is.  Do you suppose they can see all those empty plastic water bottles from up there in Poland Springs?  Do you think they really give a hoot?  They did, after all, print the message "Please recycle this container" on the flimsy label of each and every container.  Shouldn't that be enough?
So, if our Massachusetts legislature refuses to remedy the situation, what other options do we have?
We could take the bull by the horns and file for an Initiative Petition for a Law.  This would place the issue on the 2014 ballot where voters can either approve or reject the initiative.  However, when I looked at the rules for creating such intiatives I noted that the deadline for the 2014 election had already passed on August 7.  This would mean waiting until 2016. Yuk!
But wait! Just in the nick of time the group Massachusetts Coalition to Update the Bottle Bill beat the deadline and set the wheels in motion to finally fix our broken bottle bill.  Check out the list of distinguished petitioners.  However, in order to get the job done they will need thousands of us to sign our names as well. If you would like to see our bottle bill function as originally intended again, please consider adding your John Hancock to the petition.
﻿
Posted by Al at 3:49 PM

Another partial answer may be in beefing up recycling requirements. Does MA law require households to separate trash from recyclables? Are trash haulers required to do manage trash separately from recyclables? Does MA have sorting facilities and a recycle / reclamation process that stands up to safe, health conscious recycling standards?

Hi Bernie, Communities here in Massachusetts seem to be moving towards a system of pay-as-you-throw for rubbish disposal and no-charge for single-stream recycling.

Giving those empty containers a small monetary value will do wonders in removing them from the environment and raising the recycling rate.

When I was a kid my Irish relatives always reminded me to never walk past a penny without picking it up. Even more so for a nickel! 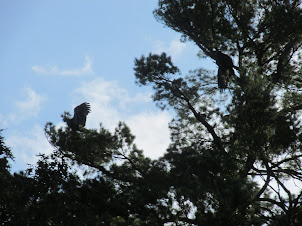 Within Sight of Eagles Nest