Slicing Through the Darkness

On most winter mornings, my commute to work has me driving through the pre-dawn darkness to the east and north.  This past week has been a memorable one as I'm sure many early morning commuters can attest.  Wednesday's drive began, for me, with glare ice for the first three miles.  Then yesterday's truly bizarre conditions made for a taxing commute that included dodging numerous fallen tree limbs, trash barrels and their lids, and even a lamp shade.  The air was incredibly warm, the south wind was howling with gusts over 50 mph, and rain was giving my wiper-blades all they could handle.  At several intersections, the traffic signals were swinging in the wind unlit.  By the time I reached my destination I was just about done-in...reminded me of that US Army ad that mentioned "doing more by 9 am than most folks do in a whole day"!
So today seemed like the "calm after the storm" and, once again, my car and I were seamlessly slicing through the darkness on dry roads.  Then on my car's radio came a song I'd never heard before.  It was sung by Willie Nelson and told the story of a guy down on his luck and homeless.  He's living under a bridge with a woman named Marie (the song's title).  The song ripped a hole through my gut.  Later I found it was written by Townes Van Zandt who passed away in the late 90's.  Willie's version is on the album Poet: A Tribute to Townes Van Zandt.  Quite an evocative song and perhaps worth a listen if you haven't heard it.

Earlier, before leaving home, I'd glanced at the Boston Globe and read an article by Jay Lindsay Fishermen say cuts cast a net of ruin: sharp reductions to cod quotas raise fears of industry collapse in New England.  Needless to say there was not much in the way of optimism in either the article or the song.

While I was at my first job the sun was also getting to work and by the time I got to Gloucester (not the Glen Campbell song) a bright blue February sky had developed.   Something made me detour a bit and drive down the bloulevard where the "Man at the Wheel" statue (which Lindsay mentioned in his article) was encountered... 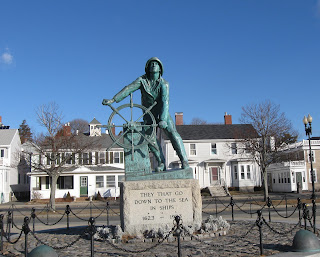 What future does the "Man at the Wheel" see as he looks out over the ocean waters?  Is there any course that can be steered to good fishing? or will New England go the way of Newfoundland where the cod fishery did collapse and left thousands with no way to make a living?  This will be a tough year for our New England fishermen.
Posted by Al at 5:54 PM