Not the Only Fish Out of Water/Skypaddling 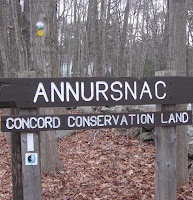 Yesterday, while carefully avoiding casting a shadow, Mrs. Trashpaddler and I continued our mid-winter visits to some of the promontories usually seen off in the distance from local rivers.  Annursnac Hill is perhaps the highest elevation in the town of Concord, MA and can be seen from both the Assabet and Sudbury Rivers.  The hill's name is of Native American origin and is said to mean either "lookout place" or "place for gathering strawberries".  We hiked in from Strawberry Hill Road and followed the Bay Circuit Trail to where a blue-blazed trail veered off to Annursnac Hill.  After a short ascent we reached an overlook about 30 ' below the actual summit.  This overlook afforded a nice vista to the northeast and the Estabrook Woods... 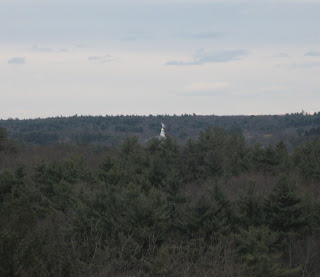 The wisps of smoke that appear to be rising from the Middlesex School's Chapel are actually emanating from a smokestack just a little further distant.  I recognized the stack because many years ago, when I wore a younger man's clothes, I was responsible for the products of combustion that entered that brick chimney and also heated the gold-domed chapel.
Looking down on this scene from above stirred in me feelings perhaps similar to ones recorded by Henry David Thoreau in his journal entry for September 9, 1851:
"...The distant meadows towards the north beyond Conant's Grove, full of fog, appear like a vast lake out of which rise Annursnack and Ponkawtasset like rounded islands.  Nawshawtuct is a low and wooded isle, scarcely seen above the waves.  The heavens are now clear again.  The vapor, which was confined to the river and meadows, now rises and creeps up the sides of the hills.  I see it in transparent columns advancing down the valley of the river, ghost-like, from Fair Haven, and investing some wooded or rocky promontory, before free.  So ghosts are said to move.
Annursnack is exactly like some round, steep, distant hill on the opposite shore of a large lake (and Tabor on the other side), with here and there some Brush Island in the middle of the waves (the tops of some oaks and elms).  Oh, what a sail I could take, if I had the right kind of bark, over to Annursnack!  for there she lies four miles from land as sailors say.  And all the farms and houses of Concord are at the bottom of that sea.  So I forget them, and my thought sails triumphantly over them.  As I looked down where the village of Concord lay buried in fog, I thought of nothing but the surface of a lake, a summer sea over which to sail; no more than a voyager on the Dead Sea who had not read the Testament would think of Sodom and Gomorrah, once cities of the plain.  I only wished to get off to one of the low isles I saw in midst of the [sea] (it may have been the top of Holbrook's elm), and spend the whole summer day there."
﻿
﻿
Posted by Al at 3:35 PM