Have We Lost Something? 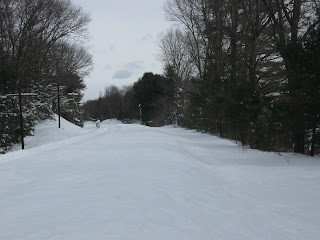 Living fairly close to the busy double-tracked Fitchburg Division commuter rail line I've noticed, over the years, that fresh snow cover greatly reduces the sound of passing trains.  However, yesterday there were no sounds to be muffled as train service along this line ceased to operate.
As the photo depicts, the inbound (to Boston) track looking towards the signal lies buried under the snow whereas the outbound track on the left saw one (non-passenger) train earlier in the day.  The Massachusetts Bay Transportation Authority had thrown in the towel before the fight even got underway.
Since many comparisons are being made between our recent storm and the Blizzard of 1978, I found my copy of the Boston and Maine Railroad Historical Society's B & M Bulletin edition for spring 1978, and after blowing off some dust read the following editorial in the White Flags section:
"Yet through all the physical trauma associated with the storm, the trains ran.  Sporadically at first and with any pretense at maintaining normal scheduling completely ignored, they did manage to serve the Boston metropolitan area with adequate service at a time when all non-essential driving had been prohibited. (Amtrak also came through admirably with the Shore Line route, which never shut down, being the only means of transportation available in and out of the state as Boston's Logan Airport was closed until Saturday, February 12).  A combination of a fortuituous abundance of locomotives, some old-fashioned common sense in dealing with the snow and motivation and dedication of railroad personnel all combined to keep the trains moving. ....It will be a long while before the people of Rhode Island and eastern Massachusetts forget the "Great Blizzard of 1978".  Unfortunately what will be forgotton all too soon is that the B & M (as well as Amtrak and Conrail) were able to maintain rail service during and after the storm while all other transportation modes were completely immobilized.  Well done!"
Sounds to me like they rose to the occasion.  Today, oh well.

Here's to getting there on a more leisurely pace, with someone else at the controls; allowing time to take in the spectacular view of our countryside, and and un-distracted quiet to think. In Memoriam of passenger trains.