Quaboag Exodus to Refuge in the West 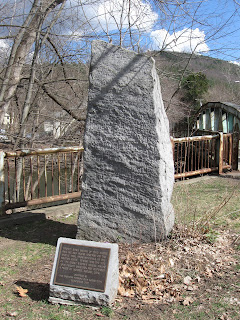 It’s the first day of spring but feels more like summer and I’m standing near the Housatonic River in Great Barrington, MA.  Between me and the river is a weathered stone obelisk that has stood in this spot since 1904.  While the words originally inscribed are no longer discernable, a newer plaque, much closer to the ground, preserves the text for future generations... 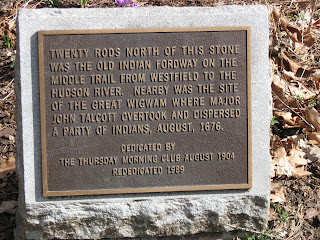 The event commemorated by the marker is one I was unaware of before reading Dennis A. Connole’s The Indians of the Nipmuck Country in Southern New England, and through which I learned just how poignant the event was to the Quaboag tribe of Nipmucks.  Most traditional historic accounts explain the event as a purely military operation.  This account, from a Great Barrington Web site, is fairly typical:  “Here, near the old fordway, in all probability occurred that celebrated scrimmage between King Philip’s warriors flying to refuge in the West, and the gallant Major Talcott, son of the Worshipful John Talcott of Hartford, who pursued them from Westfield over the wilderness trail to the banks of the Housatonic.”


Connole mentions accounts such as the above but also introduces into the mix an alternative and far more complex account from the book The Bay Path and Along the Way, written by Levi Badger Chase and published in 1919.  Chase tells the remarkable story of a Nipmuck sachem trying to lead his people to safe refuge in the Hudson River valley of New York state in the aftermath of King Philip’s War 1675 - 76.


The location and details of this encounter are still disputed to this day.  What follows is my understanding based upon the account I read in The Bay Path and Along the Way.


In the days leading up to and immediately following the death of Metacomet (aka King Philip), the Nipmucks, many of whom had fought with the Wampanoag and Narragansett forces against the colonists, found themselves in dire straits.  The war was lost.  Their food and ammunition supplies were gone.


The Nipmuck sachems had sued for peace and were given no quarter.  Left with no good options, some elected to join the Pennacooks and were ultimately duped into capture at Dover, NH.  Others tried to go back to their normal existence and were shortly rounded up, executed, or sold into slavery.  The Quaboag sachem Konkawasco, however, had apparently managed to maintain his neutral status, as promised, during the 11 months of conflict.  He and his people had remained in the present-day Sturbridge area which was then known as Tantasqua.  It is said he, having in June 1676 seen first-hand where even Christian Indians had been killed by militia at Channagongum, came to realize that staying in Quaboag was not going to be possible for him and his people.  Chase ascribes these words to Konkawasco: “What is the good of signing a paper to live under the laws of the white man and be protected.  We are destroyed, it is either death or slavery.”  Therefore, he convened a council at the island stronghold in the Quinebaug River where he explained to his people that they must leave their homes forever and journey to refuge in the west.  If they could make it there, a great man (NY Governor Andros?) had promised them protection.  To reach this refuge they would need to travel by foot the more than 80 miles from Quaboag to an area along the Hudson River near present-day Saugerties, NY.  They would have to cross several rivers: the Chicopee, the Connecticut, the Westfield, the Housatonic, and finally the Hudson itself somewhere below Albany.


A first group of 250 apparently had made the journey safely in mid-July but were seen in Westfield in a hungry and exhausted state.   This resulted in a heightened awareness on the part of colonists to future movements west.   The second group, led by Konkawasco, began the trek the second week of August and this group was comprised of many women, children and elders.   They made it across both the Connecticut and Westfield Rivers before reaching the Housatonic River and what they must have felt was safety on the river’s west bank.  However, at Westfield they’d been seen and a Major Talcott had been alerted to their passage.  He promptly led his combined troop of militia and Mohegan Indians to Westfield from where they set off in hot pursuit.   Talcott’s forces caught up to and discovered the Native American “fugitives” camped along the Housatonic River noting a relaxed manner about them.


Talcott decided to pull back and spend the night before launching a surprise attack at daybreak.  Splitting his forces in two, he sent one half to cross the river downstream from the Native encampment, while he stayed with the other group on the east bank.  His plan was to attack the encampment from the west thus trapping the Indians along the river.  His forces would then attack from the east and wrap things up.  However, as the first group crossed the river, a lone Indian fishing saw them and called out the alarm before he was killed.  This resulted in the attack occurring sooner than planned, but nonetheless caught the Native Americans unprepared and a massacre was soon underway.  As the bodies fell and the death count mounted, a strange thing is said to have happened and is thus described by Chase: “When the descendant of a noble line of chiefs stepped out and raising his hand said ‘I am Konkawasco, let my people go’, it was the Mohegans that interfered and stopped the slaughter, and the Chief and the remainder of his people were allowed to go.”


Wow!  One man bravely standing forth and proclaiming what many others knew to be true.  And it worked.  Just this once, it worked!


Is it true?  No one knows for sure or even exactly on whose account the story is based.  However, Chase presents a logical explanation in regards to the Mohegans having been familiar with Konkawasco and his neutral status.  Other accounts written by English historians mention the “battle” having been handily won by Talcott; that 45 Indians were killed, and a Quaboag sachem captured.   Additionally, Puritan authorities in Connecticut wrote a series of letters to New York Governor Andros trying to obtain the return of escaped sachems.   I’m left to surmise that if Konkawasco had been captured at Housatonic, his subsequent fate, surely, would have been recorded.  Because it wasn’t, I’m more than willing to accept the legend and appreciate its powerful affirmation of personal courage and basic human dignity.


In my reading of the events of King Philip’s War, I keep looking for individuals who conducted themselves honorably despite the prevalence of racial/ethnic hatred that swept over most.  I haven’t found many.  Concord’s John Hoar comes to mind as well as the Pennacook sachem Wannalancet, and now, thanks to Connole and Chase, the Quaboag sachem Konkawasco.  On this, the most hopeful and promising day of the year, the legend seems fitting.

Connole's book on the Nipmucks also altered my opinions of other folks whom I previously held in either high or low regard.  Despite Roger Williams having been banished from the Massachusetts Bay Colony (earning my high regard), he nonetheless continued to provide valuable intelligence to the Puritan Colony knowing that such intelligence was being used by Puritans to destroy their perceived enemies.  It appears he played a key role in the destruction of the Pequot people in the 1630’s.


On the other hand, my previously low opinion of New York’s Governor Andros changed considerably as I read how time after time he was the only real check on New England’s fanatical Puritans.  Imagine the Puritan consternation when, as Governor of New England, he declared their signed land deeds from Native Americans to have “no more worth than a scratch with a bear’s paw”.  Besides being a perpetual thorn in the Puritan’s side, he also provided refuge, in New York, for those they’d persecuted.  He had a good run before the Puritans, unfortunately, prevailed in his overthrow and subsequent exile to England.


The Mohegan people and their great chief, Uncas, are seen in a different light as well.  I’m left to wonder if there was any line Uncas wouldn’t cross in return for additional power and status.


So, earlier in the day, Mrs. Trashpaddler and I decided to follow, by car, what may have been the general route Konkawasco’s group traveled back in August 1676.  Starting in the Sturbridge location known as Fiskdale (Tantasqua), our route took us down to the Quinebaug River in Holland, MA, then north to Route 20 west.  Instead of crossing the Connecticut River in Springfield, as we did, Konkawasco veered towards the north crossing the Chickopee River and then the Connecticut River below South Hadley Falls.    Our routes may have joined again near Woronoco, where after crossing the Westfield River, we picked up Route 23 which we would follow all the way to the Housatonic River.  Apparently, General Knox used the same trail 100 years later in 1776 when he transported the 60 cannons from Fort Ticonderoga, NY to Cambridge, MA thus forcing the British from Boston Harbor.  In the town of Otis, we came upon this nicely maintained marker... 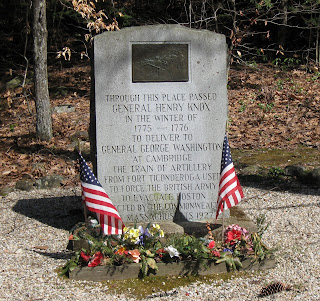 A man living across the road, Titus, explained his family helps to keep the site up and also pointed out this remnant of the original trail... 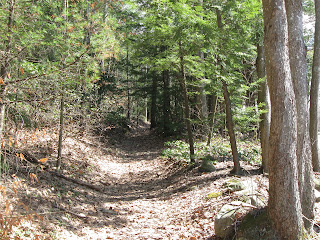 Once in Great Barrington, we enjoyed walking the town’s River Walk, nicely built along two sections of the Housatonic River and also taking in some sightseeing on a summer-like afternoon.

The Housatonic looking towards the Fordway... 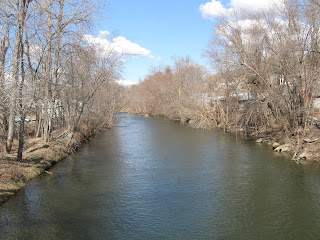 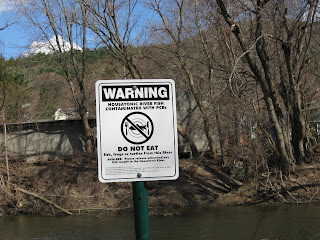 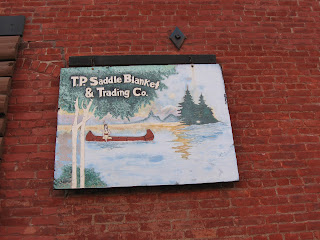 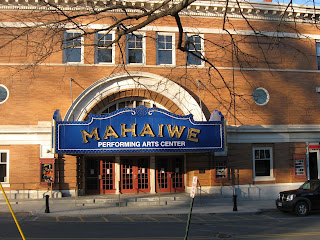 A short terrestrial trash patrol of the canoe launch by Bridge Street was conducted, in honor of Konkawasco… 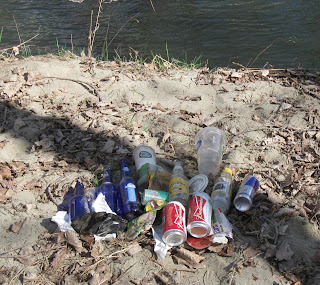 Nice entry, The Housatonic is a very nice paddle from Great Barrington south to the Ct border. The warnig sign is due to PCB's from the abandoned plant in Pittfield. The river itself is doing quite well but the PCB's are going to be an issue pretty much forever. The problem is much worse from Pittsfield down to Lenoxdale, the chemicals are in the mud and silt, the paddling is still very good.

Thanks Chris. I thought of that sign when I launched into the Concord River the other day. The sign there looks the same but is due to mercury contamination rather than PCBs. The mercury is also in the sediment and will be there for some time to come.
The Housatonic did look inviting and the canoe launch at Bridge Street might be a good place to start a downriver excursion.

great story, I am a 27 yr old male big on everything that is king Philip's Amazing that some of the original trail is still intact. Very brave Sackem and a eye opener about roger Williams. The man was truly stuck in the middle.

Michael, Glad you enjoyed reading the post. As I learn more about the so-called King Philip's War I find myself thinking "say it ain't so". I guess it shows what happens when fear rules the day.