Finding Santa in the Assabet River 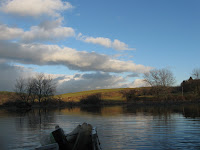 With the morning's rain ending fairly early, the temptation to get in one more winter paddle couldn't be resisted.  Shortly after noontime, I launched into the Assabet River at Cox Street in Hudson and headed downriver to the north side of Orchard Hill (pictured at left) which became my turnaround point.  Fairly early in the trip I came across a small green pail bearing multiple images of Santa.  Once Santa was safely onboard, we both marvelled at this beaver's recent tree work... 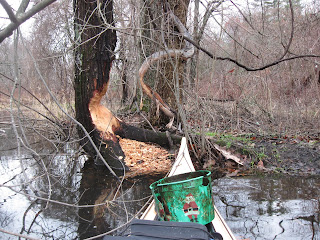 A little further downriver I encountered my first ever floating boomerang.

Trash was plentiful in this approximately 1-mile stretch of river.  Quite a difference from the nearly trashless 1-mile section of the Ipswich River paddled yesterday.
Back at Cox Street all passengers disembarked while Santa watched from above... 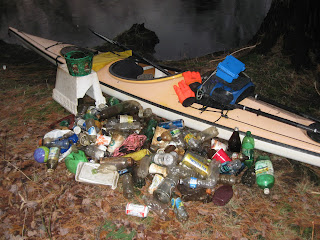 This crowd totalled 143 and was composed of 85 recyclable containers (13 redeemable) and 58 pieces of miscellaneous rubbish including styrofoam, plastic bags, nip bottles, and empty spray cans.
YTD = 7499 which I'll round up to 7,500 for the year.

What happened next served to remind me how important it is to be nice when around Santa.  I reached into my boat's forward hatch for the drybag containing my car keys and came up empty.  Not a good feeling.  Upon looking in my car's window, there on the front seat I espied the bag with the keys.   A quick call was made to Mrs. Trashpaddler, who then contacted AAA for me.  At that point, I'm left expecting a long wait in a rainshower for help to arrive.  But before I had even finished securing my rooftop yacht, AAA appeared and a jolly bearded fellow wedged the car door, inserted a hook and unlocked my car in a jiffy.  As he left he said Merry Christmas to all and to all a good night!
﻿
Posted by Al at 5:59 PM

What would we do with AAA. Have a great Christmas Al

Yes, AAA sure is great when in that kind of a jam. I've been a member for many years but yesterday was the first time I needed to make such a call for help. I'll have to remember to enter the AAA phone number into my cellphone for future catastrophes.
Left to my own devices, I had only the newly aquired boomerang to work with and darkness was setting in. Probably would have been there all night! Merry Christmas!

what? you mean you DON'T know how to break into a car using a boomerang??
what an interesting day you had, three cheers for AAA -
merry christmas !

Thanks for your comment! They're no Santa in a bucket, but we do what we can!
Merry Christmas!