A Better Way to Throw Away 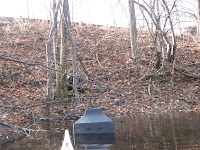 The photo at left shows a "Don't do" in regards to disposal of unwanted television sets.  But what is the proper way to dispose of such items as TVs, computer monitors, window air conditioning units, etc.?  This morning, I found myself wanting to dispose of 3 such items of my own.  After loading them into my car, my hope was to have them properly recycled or disposed of and not to return home with them.   Had I gone to my local town's transfer station, they would have accepted the air conditioning unit (for a fee) but not the TV or computer monitor.
Fortunately, I recalled reading in Ed the Web Guy's blog about a place in Ayer to take such items.  However, since I was outside the regional limitations of the facility he used, a continued search brought me to All American Recycling LLC on Sculley Road in Ayer, MA.  They accepted the items I had, for a very reasonable fee, and I was soon on my way home with an empty car.  They will even pick-up items for an additional fee. 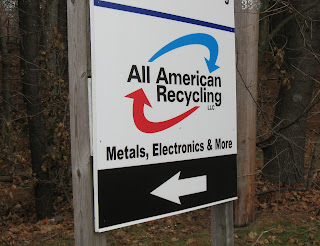 They're located just a little to the west of downtown Ayer near the intersection  of West Main Street and Sculley Road.
For those using waterways as a reference, they're located nearby to Nonacoicus Brook between Plow Shop Pond and the brook's confluence with the Nashua River.

Speaking of Nonacoicus Brook, did you know that in 1657, when the General Court offered Major Simon Willard a 500 hundred-acre tract of land, wherever he could find it, he ultimately found it at this confluence noted for its intervales or meadows?  It became known as the Nonacoicus Grant.  Apparently a Native American sachem living in Pawtucket (Lowell), John Sagamore, owed him a debt and paid it with this land.  Oddly, Mrs. Trashpaddler wasn't nearly as fascinated by this piece of information, as was I.