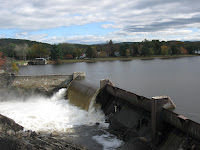 The place I paddled near today no longer exists in the sense that it once did.  By that I mean that the elements which once gave this place greatness have been so altered as to render it only a shell of its former self.  Once, this was a place of much Manitou in the world of Native Americans.  I’m using my own understanding of the word Manitou to say that here, at this once great waterfall on the Quinetucket River, the power of the Great Spirit could be seen, heard, and harvested in the form of migrating fish.  There were several great waterfalls on New England’s larger rivers, and they all seem to have been gathering spots for diverse groups of Native Americans during the springtime of each year.  They were places of renewal.  Another winter had been survived.  Old friends and acquaintances would be there.  New babies would be introduced.  Marriages would be entered into. There were games, competitions, and trading.  Those tribal members who hadn’t made it through the long winter would be remembered.  These gatherings had been occurring for thousands of years.


All of this would change forever on one fateful day in the year 1676.  On the morning of May 19th there were three Native American villages near the falls.  Two were located upstream, one on each side of the river, and a third was on an island downstream of the falls.  In addition to the usual catching and smoking of fish, there was also planting of corn, beans, and squash.  Because a state of war then existed with the United Colonies the fish and planted crops would be crucial in sustaining the Native American cause.  The previous winter had been most difficult for the Narragansetts who had seen their food supplies destroyed at the Great Swamp Fight/Massacre.  Most of the Native American leaders and warriors of the Wampanoag, Narragansett, and Nipmuc confederation were camped at Wachusett Mountain from where they were conducting raids on surrounding colonial towns.  They were relying on those left at Peskeomskut to be successful in procuring food supplies.


On May 12th, two Colonists who had been held captive at Peskeomskut escaped to Hadley and told colonial authorities that the villages at the falls were lightly guarded by perhaps as few as 60 warriors.  In light of this new intelligence, a council of war was convened and a military expedition under the command of Captain William Turner was authorized.  The force consisted of about 150 mounted men and a few foot soldiers and guides.  Oddly, this expedition also included a chaplain, Reverend Hope Atherton of Hatfield.  From what I can gather, the only goal of the expedition was to launch a surprise attack on the villages and bring about total destruction.  In order to accomplish that goal, the expedition needed to cover approximately 20 miles under the cover of darkness and fiord three rivers without being detected.   With the help of a thunderstorm which sent some Native American sentries to their wigwams, and the continuous noise of the waterfall, they arrived at Peskeomskut at daybreak on the morning of May 19th.  Turner’s force targeted the village on the north side of the river, Wissatinnewag.   (The location of Wissatinnewag can be seen on the far side of the river in the opening photo.)


Once within the still sleeping village, the soldiers, now on foot, dispersed amongst the wigwams and at the appointed signal began firing at the occupants.  Imagine the terror the Native Americans, most of whom were women and children, experienced waking to the sounds of gunfire within their homes and finding their only escape was jumping into the torrent which would carry them to their deaths on the rocks below the falls.  Soldiers reported more than one hundred bodies dead on the ground and another one hundred and thirty had been sent to their deaths over the falls.  During the slaughter only one Colonist was killed when he was mistaken for an Indian upon emerging from a wigwam.  The Puritan cleric, Increase Mather, would later call this “a great and notable slaughter amongst them” in his 1676 book  A Brief History of the War with the Indians in New-England.  Mather had not taken issue 5 months earlier, in December 1675, when hundreds of Native American women and children were burned to death in their wigwams at the Great Swamp Fight/Massacre.  His and other Puritan clerics lack of condemnation for that massacre may have given men such as Turner the green light for the killing women and children.


Atrocities were committed at Wissatinnewag by some including a Captain Holyoke who is said to have killed three women and two children with his sword, upon finding them hiding at the river’s edge.  No prisoners were taken and no quarter given.


Was this what Reverend Mather meant when he wrote “the professed, pious, and main desire of the Fathers of this Colony; viz. to propagate the Gospel and Kingdom of Christ among these Indians, who in former ages had not heard of his fame and Glory”?


What about the expedition’s chaplain, Rev. Hope Atherton?  What were his thoughts and actions at the scene?


While performing mop-up operations, a young English captive was found in a wigwam and he told the soldiers that Metacomet (aka King Philip) and 1,000 of his warriors would be arriving shortly.  This intelligence was not well received by this “heroic” band.  In fact, panic swept over the soldiers as it earlier had the Native Americans.  They fell into disarray and began a scattered and unorganized retreat that brings to mind Monty Python’s “run away”, “run away”.  Despite the fact that Metacomet and his forces were many miles away, a smaller force of warriors (perhaps only a few dozen) from the two nearby Native American villages launched a counter-attack and it resulted in the death of Turner and 38 of his men.


Several days later two men would separately wander into the town of Hadley.  One was a young man who managed to get across the river in a canoe and the other was the chaplain Rev. Hope Atherton.  Atherton would later tell his congregation in Hatfield a wild story of his wanderings which included his having attempted to surrender to the Natives only to be turned away.  He also couldn’t explain how he had crossed the river and his accounts were disbelieved by his neighbors.  Afflicted with hallucinations, he died less than 13 months later.   Considering that he was only 29 years old and the father of three young children, it is amazing he was able to live with himself that long!


As early as 1796, dams were being built at the falls until nearly all of the river’s flow was diverted to a man-made canal and, today, the once great falls see only a fraction of the river’s flow.  This photo shows the canal at just about full capacity... 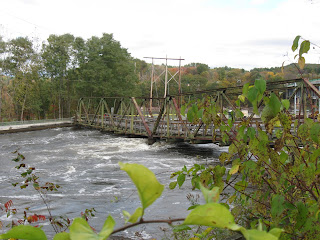 The Connecticut River can be seen in the distance behind the canal.  It is at a much lower elevation and flow.

In 1900 a monument was dedicated at Peskeomskut by the Pocumtuck Valley Memorial Association... 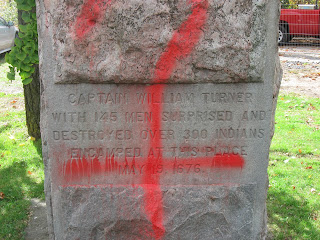 (Note: Orange spray-painted question mark may be related to ongoing construction around the monument)
At the dedication ceremony, the final speaker and orator of the day was Ralph M. Stoughton and in his remarks recounting the events he included the following: “There are exceptions in all things but as a whole the Indian was defective both mentally and morally, incapable of the larger instincts of humanity, as inspired by Christian influences.  Amid all the uplifting associations of civilization, the Indian was an Indian still.”


Mr. Stoughton’s racial attitudes, though indicative of the time, were all wrong.  Today, I would much prefer to paddle my boat to the Peskeomskut of old than what his so-called “Christian inspired civilization” replaced it with.


The Town of Montague, which includes the Village of Turners Falls, has on its Web site the following: “In recognition of the tragic nature of the Turners Falls Massacre, the Board of Selectmen and the Town of Montague, as part of its 250th anniversary, joined with representatives of various Native American tribes on May 19, 2004 in a Reconciliation Day ceremony.”


I wonder if they considered changing the name back to Peskeomskut which is believed to mean “at the rock divide”.


After paddling the area between Barton’s Cove and the French King Bridge, I walked around a bit in Turners Falls.  The Great Falls Discovery Center provides excellent displays of the animals and plants found in and around the river... 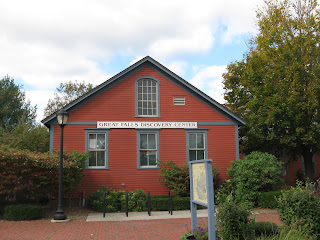 I didn’t see the word Peskeomskut though.


However, there was a brochure for a Historic Downtown Walking Tour of Turners Falls and it guided me to a Peskeomskut Park located several blocks from the falls... 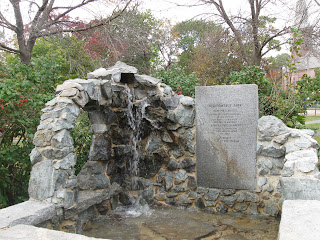 At daybreak, I had launched into Barton's Cove, just upriver of Peskeomskut, and after watching an eagle fly to the west, I turned to see this preview of the sunrise... 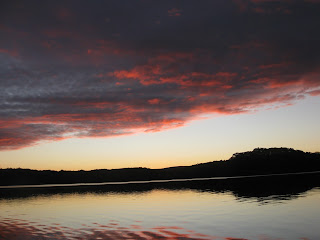 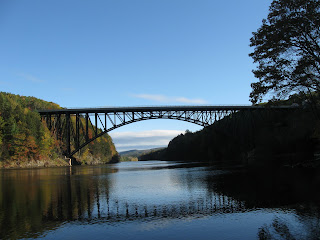 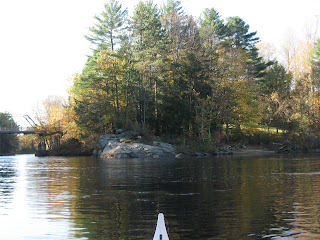 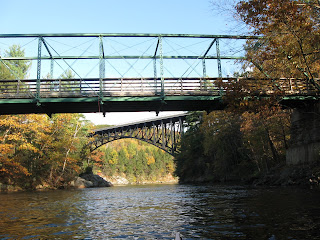 Nearly all of the trash I encountered today was floating amidst the grass in a section of the river called the "Horserace".  The most egregious find was a floating 2.5-gallon plastic container holding 3.5 quarts of used motor oil.  Once back at Barton's Cove the day's haul missed out on a moment in the sun... 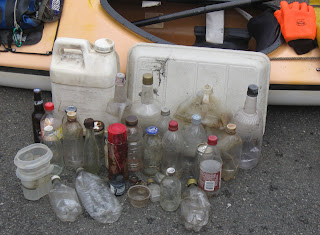 There were 24 recyclable containers (3 redeemable) and 11 pieces of miscellaneous rubbish such as a can of spray paint and a cooler cover.  My YTD total = 5804


The only gunfire heard on this morning was a volley fired by some duckhunters in the vicinity of Barton's Cove, just after sunrise.  That duckhunters were present was also indicated by a group of duck decoys seen floating in a cove.  I no longer cared about how silly my blaze orange hat and gloves might look.
This merganser, however, didn't appear too concerned... 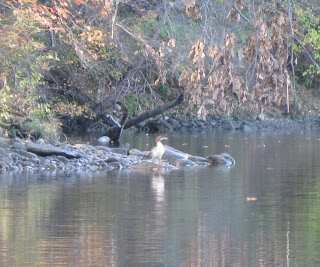 Belted kingfishers were also going about their business as usual.


History of the Connecticut Valley in Massachusetts, with illustrations and biographical sketches of some of its prominent men and pioneers.  Vol. 2 1879, Louis H. Everts


History and Proceedings of the Pocumtuck Valley Memorial Association, Vol. 4

Hope to be able to paddle with you at Green River Reservoir in Vermont some day. And if so, if I am smart I won't say a word, but just listen to you!
Bernie
P.S. ck out the Halloween story I wrote. It is posted on my blog.
Titled "At the drop of a spoon".
http://litterwithastorytotell.blogspot.com/

Bernie, Thanks for your kind comments, however, my hope is to not be perceived as preaching to anyone.

I'd be glad to paddle the Green River Reservoir with you someday. I'm sure you'll know more about its history than I will.

I enjoyed reading your Halloween story "At the Drop of a Spoon" and was glad to find it was fiction. It touches on how real that fiction might be for those suffering with dimentia/Alzheimers disease. I could hear, feel, and see that swarm of bees rising up out of the hole! Yikes!

I find the writings to be fascinating in a morbid way
My brother lives in turners falls (capitalization omitted to honor all of the tribes descimated at the hands of zellots. I' m looking forward to presentingt this article. Im sure he will find it as appaling and cherish the knowlege as i do, and knowing this tip of an iceberg of truth. Peace Brothers

well written- it saddens me in a way to hear the struggles of the natives during the king Philip's war but in turn the English had no choice to react to their towns being attacked. the indian/english war of 1675/1676 isVery interesting politically & culturally.

John and Michael, It is a sad story. Even though it is a mute point, I wonder how things might have gone differently. For example, what if the United Colonies forces had been defeated at the Great Swamp? That seems to have been a pivotal event.