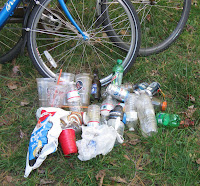 Mrs. Trashpedaller and I biked from Ayer to East Pepperell on the Nashua River Rail Trail this mid-day and came upon the usual bits of litter along the way.
Our haul, pictured at left, numbered 26 and broke down as 21 recyclable containers (5 redeemable) and 5 miscellaneous rubbish.  YTD = 5733

Shortly after starting out from Ayer, I had noted a bag of plastic litter off to the side of the trail. We decided to take a closer look at it, if still there, when we returned.

Sure enough, it was still there and presented us with a trash pedalling dilemma.  The bag was full of recyclable, but not redeemable, plastic containers.  Someone or perhaps several people had taken the time to collect 156 plastic containers and placed them in 2 bags tied together.  Would they be returning to pick them up?  Had they, perhaps, forgotten these 2 bags?  We hemmed and hawed until finally deciding to place them with our small collection and see that they were recycled.  Hopefully, whoever rounded up this batch won't mind our having assisted in getting them recycled.  Below is a picture of the bags encountered... 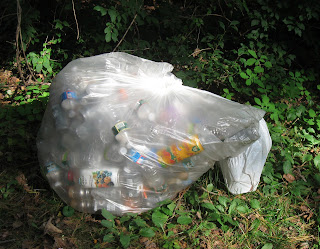