Assabet Region Pedalling Back in Time 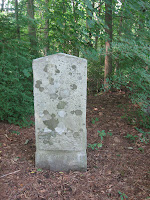 On this dog day of August, Mrs. Trashpaddler and I pedalled back in time a bit to the difficult month of February 1676.  We started our time travels in the Hudson Road parking lot of the Assabet River National Wildlife Refuge and pedalled along Winterberry Way past Puffer Pond to Taylor Way where we followed the course of Taylor Brook.  At the junction of Patrol Road and White Pond Road we left the refuge and pedalled down the hill to Russell's Bridge where we entered the Assabet River Rail Trail (non-paved section).  The trail took us along the south side of the Assabet River and Crow Island before bringing us to Sudbury Road.  Here we left the trail and followed Barton Road a few hundred yards to where a small marker points towards the Boon Monument... 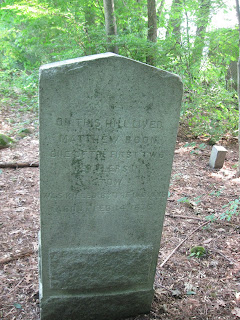 Reaching the monument requires descending an overgrown path about a hundred feet towards the river.  The opening photo shows the side of the monument facing the road and gives the date when erected as May 16, 1883, whereas this photo is of the side facing the river.  It reads: "ON THIS HILL LIVED MATTHEW BOON, ONE OF THE FIRST TWO SETTLERS IN STOW, WAS KILLED BY INDIANS ABOUT FEB. 14, 1676."
The month of February 1676 was when the war known as "King Philip's War" entered the SuAsCo region.   Native Americans alledged to be loyal to Massasoit's son, Metacomet (derisively called King Philip by Colonists because of his "haughty manner"), conducted a series of deadly raids on outlying farmsteads:  February 1st saw a raid at the Eames farm in Framingham between Farm Pond and the Sudbury River; February 12th a raid at the Shepard farm near Nagog Pond in Littleton; and the Feb. 14th raid at Matthew Boon's home along the Assabet River in Stow.
These events combined with an additional raid further to the west at Lancaster resulted in an atmosphere of fear similar to what we've experienced in our post 9/11 world.
Approximately 500 Christian "Praying Indians" were already imprisoned on Deer Island in Boston Harbor (supposedly for their own safety).  However, in Concord, local authorities had placed the Nashobah "Praying Indians" under the care/guard of John Hoar at the present location of the Orchard House.  Local citizens, gripped with fear, took it upon themselves to invite Captain Moseley, the notorious Indian fighter/hater, to rid them of such a threat.  On Feb. 20th he arrived in the town and hearing nothing but encouragement, the next day seized the Nashobah "Praying Indians" without any legal authority and forcibly delivered them to Deer Island.  The only citizen that actively objected was John Hoar.  This same John Hoar would be the man who would gain the release of Mary Rowlandson from her Native American captors at Redemption Rock near Mount Wachusett in May of that same year.
How ironic that less than 3 months later, Hoar's only son Daniel would be involved in the sad event that may have resulted in the naming of Mount Misery in Lincoln.  On August 7, 1676, 5 days before Metacomet would be killed, Daniel Hoar and 3 other Concord men encountered a group of Native American women and children picking berries on Hurtleberry Hill (Mount Misery) in present day Lincoln.  Claiming the berry pickers were outside of permitted boundaries imposed on Native Americans and thereby "skulking Indians", they killed the 3 women and 3 children.  Authorities charged all 4 with murder and they were sentenced to hang.  Ultimately, 2 of the men went to the gallows on Boston Common while John Hoar was successful in having his son released alleging that while he was present at the murder, he didn't play an active role.
So, Daniel was spared from the noose and on an August day 181 years later his great, great, great grandson, Edward Hoar, would be the travelling companion of Henry David Thoreau and Penobscot guide Joe Polis canoeing the rivers of northern Maine.
Weirder still is the fact that in 1860 Thoreau would draw a survey of his friend Edward Hoar's farm in Lincoln, which included the location of Mount Misery. What an interesting series of connections!  I'm left to wonder if Thoreau was aware of them.

The ancestral connections were found in "The Hoar Family in America" by Henry Stedman Nourse.
Thoreau's drawing of the Hoar farm in Lincoln is # 53 in the Concord Free Public Library's collection.

The only trash encountered today was along the side of Sudbury Road in Stow as we pedalled back to the Wildlife Refuge.  The 16 pieces pictured represent only a fraction of what was seen along this otherwise scenic stretch of road.  Everything from plastics to a bathroom sink.  What's up with that? Are we going back to the "throw-away society" days? 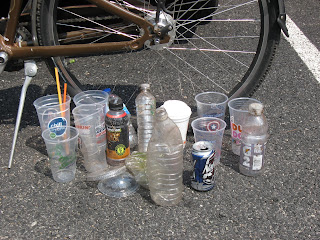