Run of the Charles 2011 Dedham to Brighton 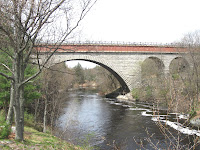 Today the Charles River was full of canoes, kayaks, and paddleboards participating in the 2011 Run of the Charles (ROTC) hosted by the Charles River Watershed Association.  All boats and boards were being paddled and sometimes portaged into a cool headwind.  The sun was pretty much a no-show.
Since there wasn't time for taking photos, I'm using a file photo from earlier this week.  Unlike the day I took the photo of Echo Bridge, today I would continue downriver and paddle beneath it.
As a trash patrol, today was a bust.  It's not that there wasn't trash.  There just wasn't time to stop and pick it up.  A token plastic waterbottle and beer can from Riverdale Park rode home in my car's trunk.
Wildlife encounters consisted of a brief flying charge from a territorial Canada goose and seeing 2 trees hosting small groups of cormorants.  While paddling alongside Nonantum Road, a black-crowned night heron was seen watching the procession.
Hopefully, folks out doing their Saturday errands will forgive the traffic delays caused by portaging boats.  Having grown up in the city of Waltham, it still seems strange to me that all traffic on Moody Street would come to a stop, thus allowing this old coot to wheel his boat across the road, even if it is just one day a year.  Never could have envisioned that back when I was a fifteen year old Waltham kid!
Posted by Al at 9:33 PM