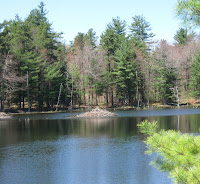 While pedaling my bicycle along the Nashua River Rail Trail on this beautiful May Day, I couldn’t help but think of all the folks who spent part of this weekend picking up worthless plastic litter in their cities and towns. Of course, it’s trash that doesn’t have to be worthless. In my opinion, it is nothing short of absurd that in 2011 we allow it to remain that way. I believe the reason it remains that way is because the bottled water industry (and coincidentally enough our state legislature) like it that way. Their idea of sustainability is to remind the purchaser to recycle the empty container. This request creates the misconception that such recycling will reduce the need for using virgin plastic in the manufacturing of new bottled water containers. Will they tell us how much recycled plastic is actually used in making those new bottles?  I recently had my eyes opened to plastic recycling misconceptions after reading some of Harold Johnson's research into this matter.  You can check it out by visiting his blog, The Flotsam Diaries.  In the upper right, click on "Plastic Recycling: The Triangle is a Lie".


When I was considerably younger I occasionally worked as a helper to a welder extraordinaire named Al. He could arc-weld anything using general purpose 6011 welding rod, one piece of rod at a time. As he would get down to the bottom of the rod he would call to me with the following bit of verse (perhaps it was his poem in a pocket): “Would you be so kind and condescending, stoop so low and be so bending, as to provide me with a new piece of 6011?”

So to all the empty plastic water bottles that don’t make it into recycle bins, perhaps the only solution the bottled water manufacturers and our state legislature are comfy with is: “Would you be so kind and condescending, stoop so low and be so bending as to pick up those worthless plastic containers littering the paths, trails, streams, rivers, beaches, roadways, and public parks? Oh, and by the way, remember to recycle them.” That sounds like a sustainable solution, doesn’t it?  Much better than assigning them a modest monetary value.

It seems to fly with most folks here in Massachusetts. It sure didn’t fly in the state of Maine, our neighbor to the north, where folks can still tell what’s a crock and what isn’t!

Thanks much for the shoutout -- not to mention the countless bits of debris you've gotten out of the water & shore! I've never kayaked or boated along rivers & ponds. But your blog is making me start to want to. So beautiful.

We always enjoy your blog. The Sudbury is looking pristine, thanks to you.