Sudbury River - South Bridge to Weir Hill and Back 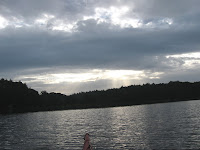 This morning I was on the river early to watch as the outer edge of Hurricane Bill headed off to the east. The photo was taken at Fairhaven Bay.
Heading upriver from the South Bridge at 6 am, trash was encountered almost immediately under the commuter railroad bridge and required a brief foray onshore to gather up a dozen pieces. Between there and Heath's Bridge trash gave way to wildlife. In this short section were seen a doe, wood ducks, eastern kingbirds, blue herons, and this small heron which preferred to stay in the trees... 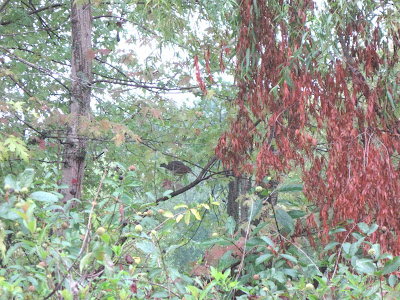 I would later see two more of these herons further upriver. Perhaps they are green-backed herons?
Just before reaching Heath's Bridge this unfortunate turtle was floating dead... 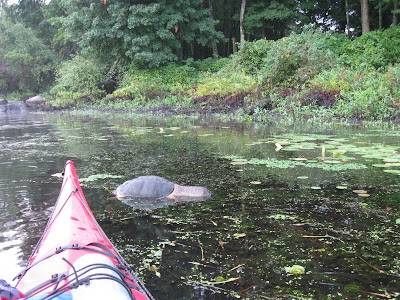 He probably had swallowed the bait of some fisherman and didn't survive the encounter.
At Heath's Bridge, some slob had left the remains from his day's fixins' at the edge of the water. It consisted of a takeout dinner from KFC and a 6-pack of beer. He only hauled out that which he could fit in his belly. What a clever oaf!
Fairhaven Bay was fairly busy with boat fishermen this morning. Counted about 12 guys fishing from 5 boats. One group of 4 had actually beached their boat and were fishing from the shore where, perhaps, they had a little more room to 'spread out'!
At Pantry Brook the river was noted to be about a foot lower than it was on my last visit. Recent rains will soon have it rising again and thoughts of the river's water level brought to mind the controversy that raged for nearly 50 years in the 1800's concerning the dam at Billerica. Area farmers contended their previously bountiful hay meadows had been rendered useless due to the dam in Billerica raising water levels and thereby flooding the meadows. According to Thoreau's journal, one interested party testified that the river was "dammed at both ends and cursed in the middle". Pretty good slogan! Unfortunately their battle was lost and the 'damned' dam remains to this day. The reference was to dams at Saxonville and Billerica and the now flooded hay meadows in between.
Reaching Weir Hill I went ashore and after a little leg stretching, transloaded the trash for the trip downriver... 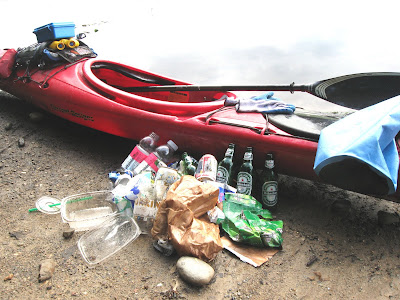 Any remnants of the hurricane were being rapidly displaced by sunny skies. One lingering and welcome effect from the storm was a very pleasant breeze in my face for the trip downriver. Additional wildlife seen were tree swallows, Canada geese, small plovers, and a broad-winged hawk below Rt. 2.
My trash count for the day was 40 pieces. Of these 16 were recyclable (11 redeemable) and 24 were misc. rubbish such as styrofoam, plastic bags, etc.
About 6 of the 40 missed the photo opportunity by being late arrivals.
My YTD total stands at 3515. Note: clicking on a photo results in a larger image.
Posted by Al at 12:27 PM

I had never read any of Thoreau's works. Had always thought he was just a well educated dissident opposed to the Mexican War. Yet spoke admiringly of John Brown. Never knew of his early death and the cause. Thanks for writing of his life & it's effect on you.Avoid pencils!