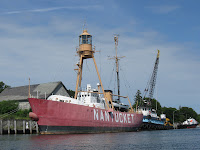 This event's official t-shirt logo reads "The Bird Island Challenge .. from Lightship to Lighthouse" written above and below the profile view of its namesake island. As event t-shirt designs go, this one's my favorite.
Participants gather each August to combine having fun paddling or rowing the waters of Buzzards Bay with helping to raise money for the Gleason Family YMCA in Wareham. There are three races of differing lengths that all begin in the Wareham River just a little bit downstream of the venerable and now retired Nantucket Lightship. All entrants paddle or row in a southerly direction to their respective turn-around points and then back to the Lightship area. Level 1 entrants turn at a buoy off of Long Beach and cover three miles; Level 2 entrants turn at a buoy off of Great Hill and cover six miles; and Level 3 entrants turn at Bird Island covering 12 miles. There is something for everyone and the variety of boats entered reflects this as well. Canoes, rowboats, kayaks and the majestic 'New Bedford' style whaleboats gathered near the start line under yesterday morning's surprisingly blue sky. It was wisely decided by event organizers to allow the whaleboats to start first thus preventing any beheadings by oar blades in the narrow confines of the river. After them came my group and we all started off at a speed most of us knew we could not sustain for long. It took about a halfmile for reality to set in and, as usual, I found myself in about the middle of the field. The course to Bird Island would take us into an incoming tide strengthened by a fairly stiff breeze out of the south. I began to think (usually preceeds disaster), "if there was a way I could get out of the tidal current by paddling much closer to the western shoreline, my position might be improved." Of course, there was also the possibility that there might not be any relief from the current and my journey might be lengthened. Being that this event, as races go, has a very relaxed atmosphere, I figured "what the heck, nothing ventured, nothing gained" and steered off to starboard leaving the field to pull away as they followed the course the crow would fly. Soon I was paddling across the shallower waters of Wings Cove and Sedge Cove, dodging some of the rocks that occasionally peeked above the surface. Nearing Butler Point at the end of Sippican Neck it was becoming apparent that my strategy was bearing fruit in that I would reach the Bird Island turnaround point slightly ahead of the three boats that were previously in front of me. This happens, for me, about as often as Halley's Comet! Now we all began riding the chop downhill for the trip back to the Lightship. Two of the boats I had passed, a 2-man rowboat and 2-man canoe, soon repassed me and set a good pace for me to follow. This was a good thing, for the third boat, a kayak that was in my class, was further back but being paddled by a faster paddler determined to close the gap between us. I never looked back until I'd crossed the finish line and when I did, there he was and we both knew he would have passed me in another hundred yards or so. Result was a rare second place finish for me and proves the old adage "Every dog has his day!"
So there I was, sitting in my boat, savoring the moment but knowing something was missing. There was no trash on my deck. Then, almost on cue, a floating bottle of Gatorade appeared. It was Kismet! It offered no struggle and soon festooned my deck, allowing this to qualify as a most modest trash patrol, even when combined with a Dunkin Doughnuts container from the parking lot... 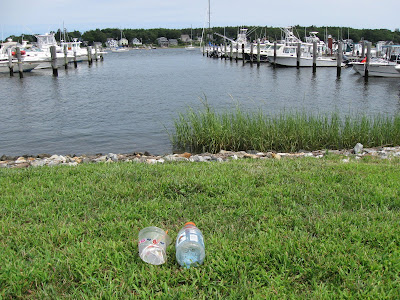 All of the days participants gathered in a shady boat hangar provided by Zecco Marine for a nice lunch of Mexican food donated by Qdoba Mexican Grill.
Posted by Al at 1:46 PM

My hat is off to you!
Not for your outstanding effort but for having the Pluck & Derring-Doo to exploit chance!