It was on New Year’s Eve back in 2007 that I created this blog and the name “Trashpaddler”.  My efforts at that time were primarily focused on the Sudbury, Assabet, and Concord rivers.  Over the ensuing decade I ventured out further, trashpaddling many additional waterways and tending to my blog faithfully.  Now, I feel the time has come to wrap things up and accordingly this will be my last post (though I will leave the blog online for awhile).  Readers of a superstitious nature may appreciate my efforts to post exactly seven times for each month of 2017, thus finishing with "lucky sevens" all around!

Through my trashpaddling activities I’ve learned that waterways are anything but static places and the trash too often found within them demonstrates this quite clearly.  The trash I encounter in our waterways these days is a reflection of our on-the-go daily existence.  In my opinion, it shows we’re short-sighted creatures too often placing convenience and low-cost over all else.  Consequently, it seems we're best guided into doing what’s right for our environment through our wallets; to keep something detrimental from getting into the environment it helps to provide a monetary incentive.  Additionally, if we want to get something detrimental out of the environment the same monetary incentive helps to make that happen.  That was the genius behind the container deposit systems.  Deposit systems aren’t anything new…they go back to early milk, soda, and beer bottles, and I sure as heck don’t remember anyone thinking of deposits as a "tax" back then.  Deposit systems still apply today to beer kegs and five- gallon plastic water bottles.  The owners of those containers want them back to avoid the cost of having to replace them.  Of course for today’s single-use plastic containers it’s not so much the avoided replacement cost, but rather conserving the resources used in making them and, further down the line, helping to insure we don’t end up ingesting them… after they’ve disintegrated and entered the food chain.

Hopeful signs of a possible sea-change?  The Town of Concord, Massachusetts voted to prohibit the sale of single-use plastic water bottles (less than one-liter).  Then there's a recent report on the Container Recycling Institute site that one of the world’s largest beverage manufacturers, Coca-Cola, indicated it may be open to a deposit system for its plastic containers in the UK.  And, most recently, the announcement that the city of Boston has decided to join a growing list of cities in banning single-use plastic bags.

Having this month shared my top five most memorable trash patrols (over the life of this blog), I'd like to share my favorite from 2017.  It took me out of New England (proper) and into the Empire State where the Hudson River Highlands were waiting to amaze me.  I’d read Valiant Ambition by Nathaniel Philbrick and was compelled to paddle some of the escape-by-water route Benedict Arnold took when he realized the gig was up:  “Want To Get Away?”

With my blog (in its virtual form) winding down I decided to preserve it in a more tangible form by condensing it into a “blook”, and found the process of doing so quite interesting.  I chose one of those self-publishing sites and after much trial and error ended up with something resembling a book.  It started out black and white on basic paper and ended up in color on 200 pages of photo-quality paper.  Consequently the cost went from negligible to requiring a small fortune.  It now graces the shelves where the rest of my waterway relics reside… 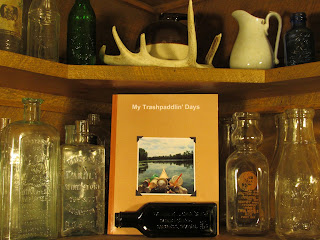 Many thanks and good wishes to those folks who've “followed”, read, commented on, or taken inspiration from this blog. The same also to those whom I was privileged to meet in person and in many cases paddled with over the past ten years.  Many have their own blogs which I’ll look forward to following in the future.  Hope to see you out on the water as it's my intention to continue paddling and, of course, braking for trash encountered along the way.  Happy New Year and may the water always rise to meet your paddle!
Posted by Al at 5:55 PM

I will miss the good reads. Will still see you on Denise' trash paddles I trust.

Thanks, Ron. High noon here and 4 degrees F. Comforting to know someone's enjoying temperatures above the teens over the past six days. I am looking forward to paddling with you, Denise, and the gang when things thaw out in May.

I can't believe it, - the end of an era! Thanks for the mountains of trash you have removed from our waterways, and all the great stories in your blog. I hope you will still join us on some SUASCO trips - soon the better. Thanks Al.

Thanks, Erik. Because of your help I've been able to enjoy navigating through the Damonmill Dam. It'll be great to paddle SuAsCo waters with you guys anytime!

G’day Trashpaddler, “say it ain’t so”....I’ll miss reading the Blog but at least we’ll get out to pillage, plunder and paddle often....

G'day and thanks Capt'n...I'll start looking for my eye-patch...it's around here somewhere.

Leaving at the top of your game.
I have always admired your keen eye for the old bottles which
tell a story about old New England.
I shall try to take up some of the trash patrol when I can get on the SuAsCo.
Bon Voyage.

Mike in the green electric canoe.

Thanks Mike, Hope to see you out on the river with your silent-running propulsion system and that 2018 provides good fishing.

Cutting through thin layers of ice
through
dry hot humid air over shallow liquid
scooping up
trash by one and twenty's
as well as history
retold
with a keen eye
research
and a good story line
TrashPaddler
has become
the iconic
historian
environmentalist
storyteller
of quiet paddling.

May his words remain
on blooks and blogs
and tips of tongues,
for memories of leaders
carry others to follow
long after the last ripple.

With adoration,
Bernie Paquette
(Author of (blogs): Litter with a Story to tell, Vermont Birds and Words, and Jericho, Vermont Photos.

Hello Bernie, I can only hope that I'm worthy of your kind words and long-time support of this blog. Thank you.

Thanks for your good commentary, images, and your good eye for trash, Al. Holding out hope that my wife and I will see you out on the SuAsCo sometime. We'll be in a big red canoe. Our catch phrase is "civic duty!" whenever we alter course for a piece of trash.

Thanks "Big Red Canoe" and like your catch phrase. Will be on the lookout for your vessel and look forward to meeting you on the river someday.

Thanks so much for your fabulous blog and all that you've done for our beautiful rivers.

I've enjoyed your blog. We paddled together on one of NH AMC's trash paddles. I have my Trash Paddler sticker proudly displayed on my kayak. Any of those stickers left? The Clean River Project sponsored a kayak treasure hunt to find trash on the Merrimack River this past week. It would have been cool to give out stickers to the winning team of paddlers.