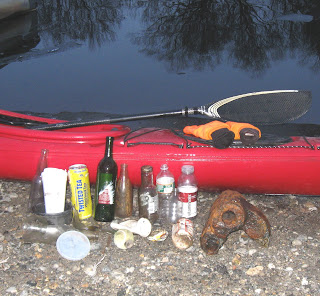 The photo above was taken on December 11, 2010 and shows a modest Assabet River haul of trash.  The chunk of steel seen in the right of the photo was recovered from the river where a bridge once carried trains on the Reformatory Branch of the Middlesex Central Railroad.  Suspecting it was a railroad-related piece I brought it home and, occasionally for the past 7 years (without much luck), tried to figure out what it was.  These photos show the 32 + lb piece after being cleaned up a bit... 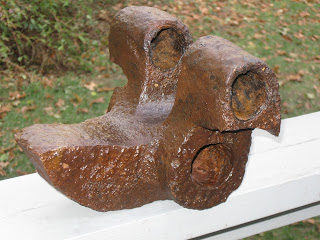 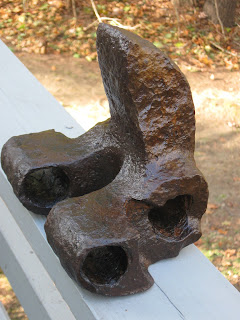 The configuration with multiple holes had me stumped.


This section of the Reformatory Branch was built in 1879 and extended the Middlesex Central RR 2.5 miles further from Lowell Road in Concord, MA to the state prison (reformatory) located by today's Route 2.   From Lowell Road trains crossed the Sudbury River, passed behind Egg Rock, and crossed the Assabet en route to Reformatory Station.  Trains operated over the line until 1927 when service beyond the Sudbury River was discontinued.

An article in the Spring 1980 Boston & Maine (RR) Bulletin by Harold I. Judkins provided the author's memories of the rail line around 1900 when he lived adjacent to Reformatory Station.  Harold mentions that "twice a month a coal train with about 20 four-wheel link and pin dump cars used to run inside the prison".
Reading his account of these cars had me thinking the piece I'd found was related to these "four-wheel link and pin dump cars".  Perhaps it was part of the mechanism used in the dumping function of the cars.  Searching online produced no luck until a recent Googling of "Coal Jenneys" diverted to "Janney Coupler" which, in turn, led me to the whole issue of hundreds of railway workers being injured or maimed back in the 1800s while trying to couple rail cars together.  Prior to the advent of the Janney Coupler railroad cars were connected to each other by links and pins such as in this photo found in Illustrated History of North American Railroads... 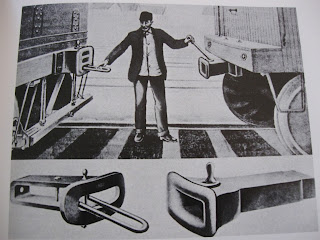 The above photo shows the worker having to dangerously place himself between the 2 rail cars in order to perform the coupling.  The railroads were looking for a safer way to perform this task, and a fellow named Eli H. Janney came up with a better idea.  It's said he worked at a dry goods store and would spend his lunch break whittling pieces of wood.  In 1873 he obtained a patent for a device that looked like this... 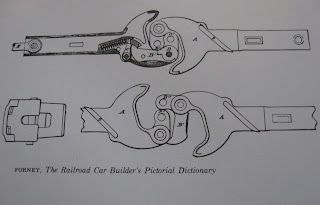 ...and it was adopted by the railroads in 1888.  His device allowed for railway workers to operate the coupling mechanism without placing themselves between the cars.  However, it took many years for the railroads to transition from the existing link and pin coupler to the Janney coupler, and to make things a bit easier they modified the Janney coupler so it would accommodate link and pin couplers as well as other Janney couplers.  To do this they had to cut a notch in the coupler's "knuckle" and drill holes for the link's retaining pin.  One version of the modified coupler looked like this... 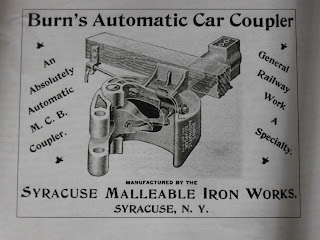 The two unused holes and notch can be seen at the outward part of the coupler (known as the "knuckle").  The above photo was found on Wikipedia and shows a 1894 advertisement.

Here's my coupler knuckle propped in the vertical position... 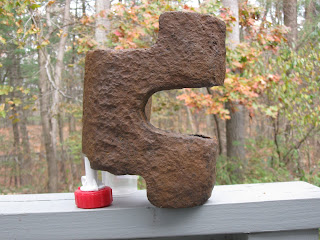 If connected to a link and pin car, the link would pass through the notch and then a pin would drop down through the two holes to retain it.

It's said that by about 1900 the transition was complete and they stopped making knuckles with the notch and extra holes which greatly strengthened the knuckle in the process.

When I first handled this piece I assumed it was cast iron.  I now understand that cast iron would have been too brittle and that this piece was more likely made of cast steel.  A chart of the many types of knuckles manufactured can be found on page 570 in the American Railroad Passenger Car part 2 by John H. White.  I believe mine was manufactured in Depew, NY by the Gould Coupler Co. and originally weighed 38 lbs.  I'd guess it was in the Assabet River for about 100 years.

So I guess everything found in the river has a story to tell even if it is a long time in the telling.

Pretty cool - great bit of investigating. How is the shoulder doing?

Thanks Erik. My shoulder is slowly improving. Should have got the one made of malleable steel. Haven't tested it paddling yet but when I do so might bring ping-pong paddles with me to keep things on a lower arc, if necessary. Hope you had a good Thanksgiving.