Still on the Fence Regarding the Bottle Bill? 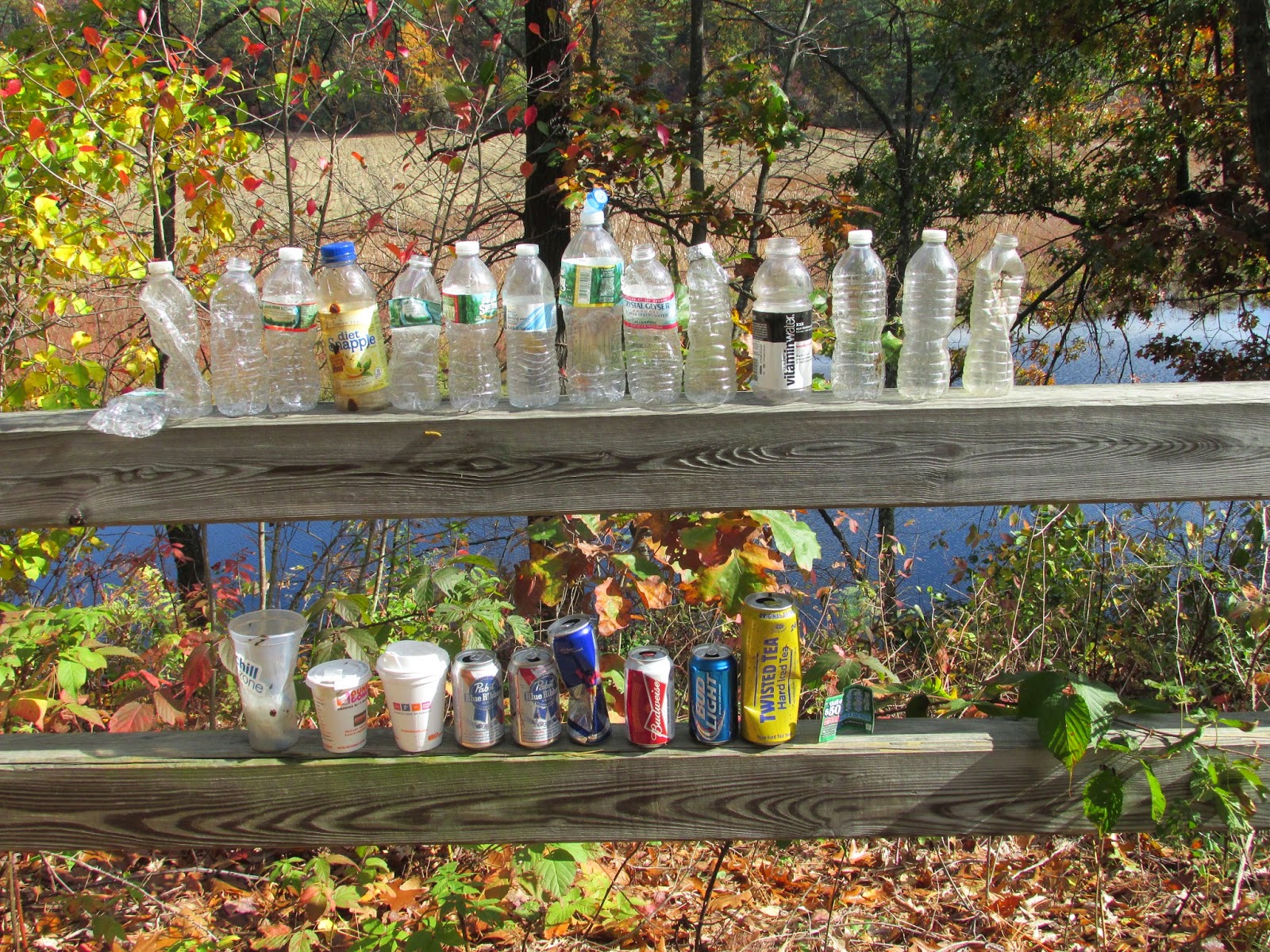 ...if so, please consider the above batch of litter collected along a 7-mile section of bike trail today.  It is typical of what's seen along both the aquatic and terrestrial trails I frequent, and reflects the change in beverage choices that's occurred since 1983 when our Bottle Bill went into effect.  It seems everyone these days is out and about with their beverage of choice in one hand and their mobile device in the other.

The beverage industry and several grocery store chains in Massachusetts have spent more than one hundred and sixty million nickels to keep litter (such as that pictured on the top fence rail above) from having a modest monetary value of 5-cents.  That's more than 8 million dollars spent on "slick Willy" television ads in an attempt to convince Massachusetts voters to vote no on Question 2 in the upcoming election.  When the ads were recently exposed for gross misrepresentations, such as the claim that 90 % of Massachusetts residents have access to curbside recycling, they decided (like many fibbers) to tell an even bigger whopper, now claiming that it's "more than 90%".

In all their ads they completely ignore the 800 pound gorilla standing right in front of them: the simple fact that in Massachusetts 80% of containers having a nickel value are recycled, whereas only 23% of containers with no value are.

If they are successful and we allow them to fool us, millions of littered empty containers, like the ones pictured, will remain just worthless pieces of trash.  As such, a good many will end up in our environment and will someday return to us in the air we breathe, water we drink, and food we ingest.

On the other hand, we could vote yes on Question 2 giving these containers the small monetary value of one nickel.  That nickel provides a little incentive for the purchaser to redeem it rather than throw it away.  If, however (and this is the best part), the original purchaser does throw it away, there is a small monetary incentive for some one else to stoop down and pick it up.   I'm old enough to remember, back in 1983, just how fast empty beer and soda cans disappeared from our roadsides.  It was truly amazing and was one of the few programs I've ever seen that lived up to its promise.

Grocery chains such as Stop and Shop, Big Y, C & S Wholesale Grocers, and Roche Bros are spending lots of  their nickels (that, I suspect, originated from their customers' pockets) to prevent our 1983 edition Bottle Bill from doing what it was designed to do best: get these containers recycled!  Does anyone seriously think the Vote No on Question 2 folks give a hoot about what happens to the containers once they've left their stores?  Do they mention our "on the run" culture in their ads?  Do they offer any solutions for the ever increasing litter problem our cities and towns have to deal with?  Do they mention how Maine, Connecticut, and New York have all successfully expanded their bottle bills?

Remember the grocery chain with the fiercely loyal employees that we heard so much about over the summer?  I can't help but notice that they're not listed with the No on Question 2 movement.  For some reason, Market Basket and also Shaw's decided not to associate their good names with the No on Question 2 campaign. That's good enough reason for me to place Market Basket and Shaw's at the top of my list when purchasing groceries in the future.

So, on November 4th, please help keep tons of plastic litter out of our environment and vote yes on Question 2.
Posted by Al at 6:23 PM